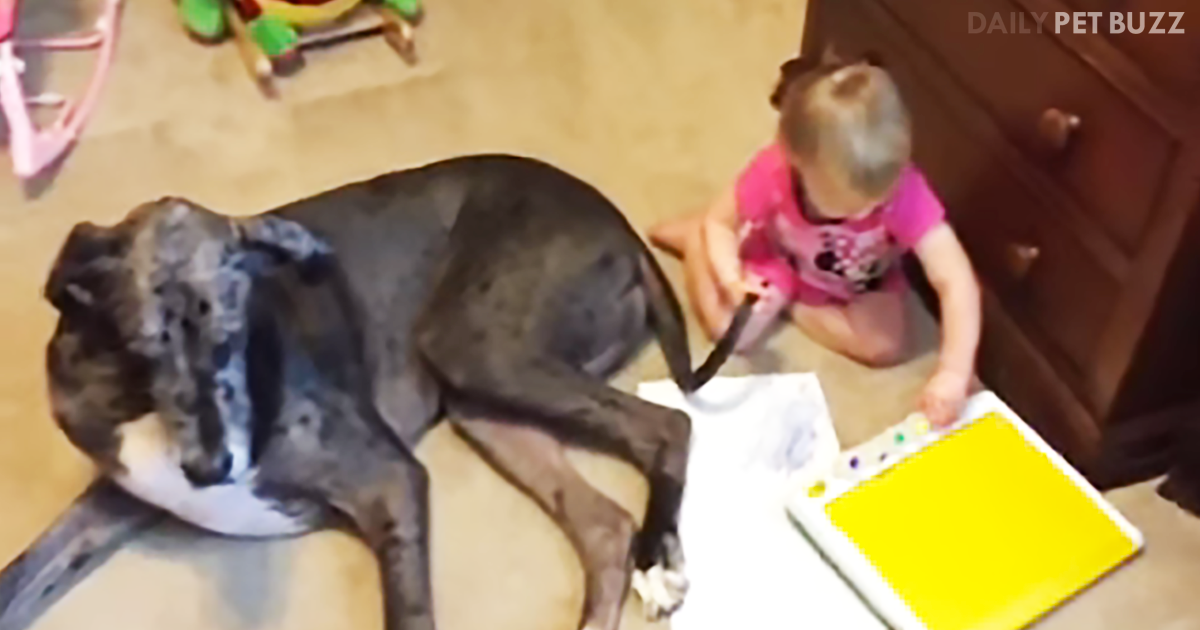 I’ve seen all kinds of hilarious videos where dogs are such good sports for children. From wearing the silliest outfits imaginable to having makeup applied to their faces (word to the wise: a Shih Tzu in lipstick is NOT a good look) to playing games like hide-and-seek with them. This is the first time that I’ve ever seen a dog be used as a tool to get something done. Not know what I mean? Check out this video.

We see a young girl, maybe around two or younger. There’s a children’s painting set on the floor, where she’s painting pictures with a very unusual brush – her Great Dane’s tail. She’s evidently done this before since she wields the tail with dexterity. The pooch just looks placidly on, and sometimes looks right at the camera.

I love the colors of the painting – she’s already getting an idea of color values. Maybe daddy just wants to encourage her creativity here and not stifle it by making her stop painting. The dog is not in any distress, as you can see in the video. She’s not even panting hard or anything. She’s having a blast creating a whole different range of colors. It actually looks like a nice painting – well, nice for a sub-two-year-old. Maybe she’ll start a movement of people using dog tails for painting.

One reason this dog might be so tolerant – aside from Great Danes generally being easygoing and laid-back pooches is that he seems to be on the older side. He’s content just to lay there, and as long as she’s not viciously yanking on his tail, he’s fine. What’s a little paint on the tip of one’s tail? It’ll probably come off easily. It’s great that he’s bonding with her like this. She’ll love this video when she’s older.