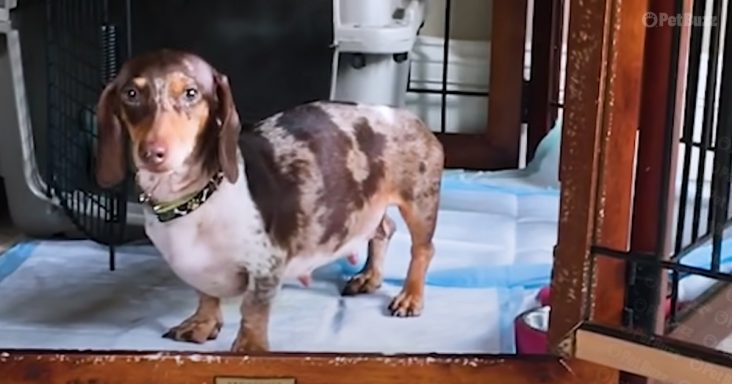 Hazel is a Dachshund who was saved from a puppy mill while she was pregnant. She was taken in by Janice, who became her foster mother. At first, Hazel was very insecure and nervous.

Hazel would barely leave her kennel. When she came out, she would run right back inside, and Janice would sit with her leaving out treats to make her feel comfortable.

Every day Hazel became more calm and relaxed with Janice. She had no idea what a toy was, and she was excited to play with one. Eventually, Hazel climbed onto Janice’s lap and stayed there.

Janice could feel the puppies across Hazel’s belly. She didn’t know at the time, but 7 puppies were waiting to be let out. Two weeks later, Hazel gave birth.

At this point, Hazel never left Janice’s side, so she was with her throughout the entire birthing process. When the first puppy was born, Hazel was clueless, but her maternal instincts kicked in by the second one.

Since Hazel was similar to an ice cream flavor, the puppies were called the “Häagen Dachs.” Their names were “Peppermint Bark, Rum Raisin, Marshmallow, Cookie Dough, Truffles, Bourbon Cream, and Praline.”

Janice’s grandchildren loved to play with them in the yard, and she was happy to see Hazel finally acting like a natural dog. Hazel was adopted by a loving family after 10 months, and the puppies were with them for 10 weeks.