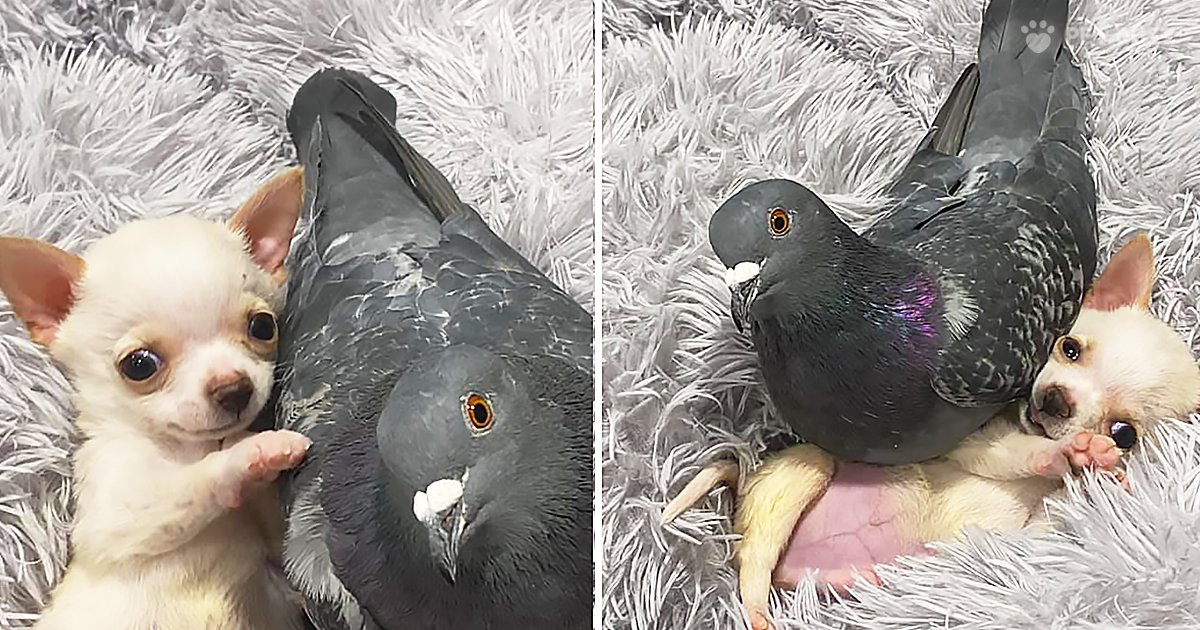 Herman and Lundy are the strangest of friends but a pair who are clearly meant for each other. There is no barrier that love can’t overcome, with the difference in species doing nothing to stop the two from cuddling up. Both animals are rescues who suffer unique disabilities, and their interspecies friendship has changed the lives of many other animals in their foundation.

‘The Mia Foundation’ is an initiative formed to support and rehabilitate animals with birth defects. The rescue foundation is based in Rochester, New York, and is headed up by Sue Rogers. Most of the rescues find homes while a few are kept to be included in school programs discussing bullying. Thanks to these inspiring unlikely friends, donations have been streaming in.

Herman is a pigeon with brain damage who was discovered in a car dealership’s parking lot. His neurological damage left him unable to fly and disturbed. The disheveled pigeon was found seated on the pavement for three days, not moving once. Unlike other nearby rescues who wanted to rescue the poor pigeon, Rogers instead takes care of Herman. Most of his day is spent in a crib, but he is taken outside daily for stimulation.

Six-ounce eight-week-old Lundy, a chihuahua, arrived at ‘The Mia Foundation.’ That’s small enough to fit in a shirt pocket. The South Carolina breeders brought him in due to a hind leg condition called ‘Swimmer’s Syndrome.’ This uncommon deformity creates stiffness of the back legs that results in an inability to stand.

From the moment that Herman and Lundy met, it was clear there was something special between the two of them. Instead of Herman pecking and Lundy nibbling or biting, the two snuggled closer together. Instant friends and utterly adorable, Sue couldn’t help but snap up a few photos. After sharing shots of the sweet pair on social media, the foundation brought in a whopping $6000 in donations in just two days – enough money to cover high-end surgery for one of her rescues.

Whether or not they’ll be separated, only time will tell. It seems that Lundy’s affectionate nature charmed one of his rescuers while traveling to The Mia Foundation in Rochester. It’s possible that he may have a new home already, but here’s hoping that the kind soul takes Herman along too. For now, it seems the two remain living together happily, as indicated by their Instagram page. The world’s favorite chihuahua and pigeon duo have made the foundation famous.

With the help of two wheels, a lot of love, and the support of his best friend Herman, the pigeon, Lundy gets around fine. The permanent resident Herman is better off now that he has a compassionate companion to rest with. The two are so affectionate that they’re often seen cleaning each other and even kissing. Well, an adorable little peck at least.

Herman, the neurologically damaged pigeon who can’t fly and Lundy the chihuahua puppy whose hind legs simply don’t work, are a duo destined for each other. ‘The Mia Foundation’ has done New York proud, rescuing so many animals who are in need of dire help. Now these two interspecies friends & cute “spokesanimals” are raising the exact awareness needed to make a difference.