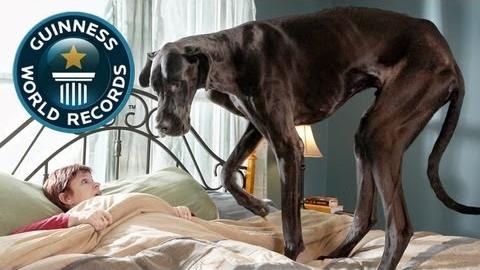 Back in 2014, this couple from Nevada fell in love instantly with a Great Dane pup when they saw him for the very first time. In that moment, the doggy was still tiny enough to be handled and held in arms, but a lot has changed since then! Everyone knows that Great Danes are some of the largest dogs on Earth, but they never expected to grow SO much!

After only a few weeks, they already started noticing that the dog was changing drastically and growing at an alarming pace. After a few months, his size doubled, and by the time he was half a year old, it had already tripled. Now that two whole years have passed, the little pup named Rocko has finally became a giant, weighing 160 pounds and standing almost 7 feet tall on his back legs.

According to the report by ABC7, he started growing amazingly fast since he was a puppy and he simply never stopped. He’s only now slowing down on the growing, and since he’s still fairly young, he doesn’t always act according to his size. He still tries to climb up and sit on people’s legs. What a cutiepie!

Watch this big dog with an even bigger heart in the video below.