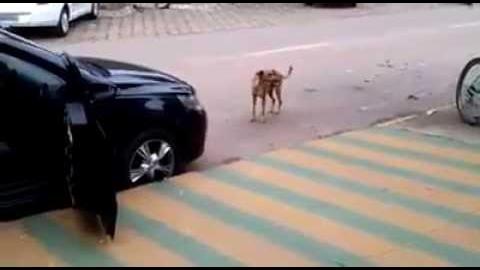 Dogs are amazing and very entertaining creatures. We all know how much they like to play around and perform tricks. But the cute dog featured in the clip below likes to bounce to the beat. When a car pulled up in front of him and started playing a funky tune, this pooch could not stop himself from moving along with the music. This guy just made my day.

This was not a trick or anything planned. It was just a neighborhood dog enjoying the music to the fullest. It seems like he really loves the beat, doesn’t he? You are going to be floored when you see this hilarious clip. This dog is boss!

This dog is a stray and I’m not sure where this was filmed, but the music sounds like it is from Mexico or another Spanish speaking country. It is fast paced and has a cheerful, upbeat sound, which is possibly why the dog liked it so much. The dog was walking in front of the parked car when the music started.

Once the music began to play, the dog stopped in his tracks and began to dance, bobbing up and down to the beat. He’s so cute and his little ears are flopping. I just wish, after seeing how sweet he is and what a good dancer he is, that someone would take him home and love him.