Anyone who has seen a child’s tantum has to know that there is a certain art form to it. The kids are not stupid. They know how to maximize the most potential embarrassment for the parent ” which is why they tend to do it in the largest crowds. There are some though, who like to work in more intimate settings. Like this short video ” it was a Vine ” that shows a dog demonstrating proper tantrum technique.

This tantrum is a thing of beauty and its full six-seconds deserve the most in-depth explanation possible. I will be that person to do it. First, the pooch learns something that he does not like. Perhaps he will not be getting the dog treat that he so desired. Maybe he’s not being allowed to jump on a person’s lap. Maybe he discovered that Odie is a dog from the comics and is not real. Whatever the case, he immediately whines loudly. That’s the first part.

Secondly, he races over to a spot on the rug and throws himself down on it like a spoiled, petulant child. Boo! Life is not fair! He rolls around on the rug, demanding attention from everyone. This is classic child tantrum behavior. Maybe he thinks that if he shows enough of his displeasure, someone will take pity on him and change their ruling. That is the second part of this tantrum.

Now we come to the third, and the best part of this whole thing. I’ve watched it more than government officials did with the Zapruder film. His mommy says, quite loudly, ‘No one cares. Get over it.’ That alone would be the perfect way to end it – but he goes one further and does a disgusted head shake at her. What a classic. So much going on in a mere six seconds. This is story-telling as an art form.

Have you had your dog throw a similar tantrum? Tell us all about it in the comments section! Also, please ‘Like’ us on Pinterest. 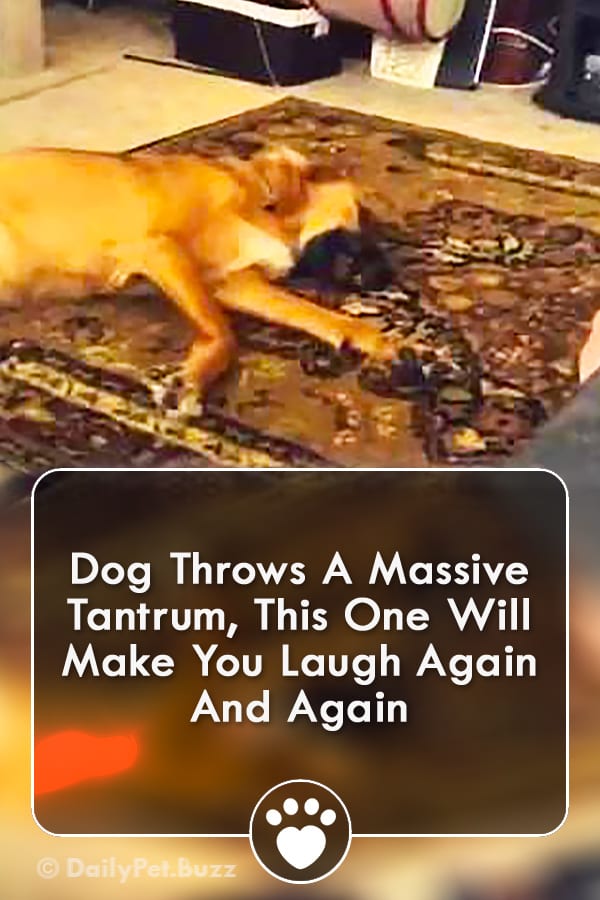