I’ve watched a lot of animal videos over the course of my life. I’ve seen friendships between cats, dogs, mice, and even one friendship between a dachshund and a lion. I have never seen one between a dog and a bird. Until now. This video shows a dog that looks like it might have Jack Russell blood playing with a magpie.

This is not ordinary play either. It’s very rough-and-tumble. They are taking care not to hurt each other, but there’s still nipping and wrestling. It’s fascinating to watch. What makes it work is that they are close to the same size. Were this a situation where a Mastiff tried to play with a magpie, the first time the dog rolled over, they’d be using a spatula to scoop up the bird.

Another funny thing about the video is that a woman walks out in the middle of it, talking on a cell phone. She’s obviously seen this type of behavior before because she doesn’t scream, ‘OH NO, MY DOG IS BEING ATTACKED!’ Nope. She just starts taking wet clothes out of a basket she was carrying and starts hanging up clothes without stopping the conversation. The magpie knows her ” he even runs over to a sheet she’s hanging up and jumps on it with nary a reaction from the woman.

This is just a really cool video that shows, once again, species can get along with each other just fine. Of course, the real litmus test would be if a cat and a magpie were able to play like that. Cats just have the instinct to eat birds, and it would be very hard for one to break its programming like that. Even if they were playing, I’d be waiting for the double-cross from the cat. They stop playing, the magpie turns to fly off and boom, cat dinner.

I couldn’t stop grinning watching this video. How about you? Did you smile? Leave a comment below! 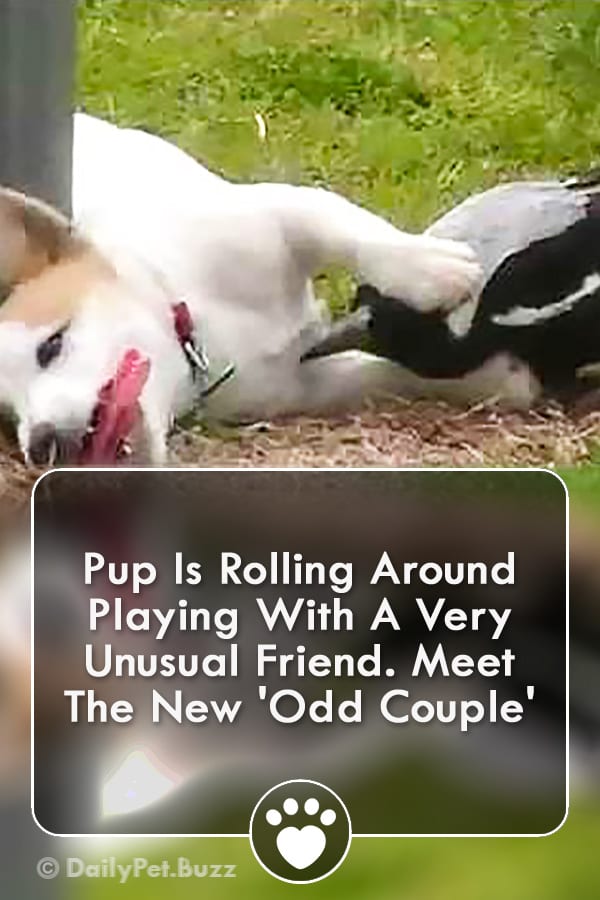