I’m not a big fan of reunions. I haven’t attended either my high school or college reunions and as I get older, the less inclined I am to do so. It just would dredge up some awkward memories. These do serve a purpose for some people though – perhaps to reminisce – or in the case of others, try to party like they did 20 years before – which does NOT end well for them. Reunions aren’t limited to humans, though. People and animals can reunite too – as I’ve written about several time. This one is about a man and a gorilla.

A conservationist named Damian Aspinall is riding on a boat in the waters of a stream in Africa. He’s there for a very specific purpose ” to see a gorilla that had stayed in his sanctuary. Five years have passed since he released the gorilla named Kwibi back to his old environment. He wants to see if he’s remembered. He cups his hands to his mouth and makes what I presume is a gorilla sound. Before too long, they sight Kwibi and bring the boat to land.

Damian is showing some nerves when he gets off the boat to greet Kwibi. It’s warranted ” even though gorillas are smart, who knows if he remembers his former keeper. The gorilla could be priming himself for an attack and while the team does have a contingency plan in case things go sideways, Kwibi is so strong that he could wreak havoc on even the most well-laid of plans. Fortunately, things go smoothly as the gorilla responds with warmth towards Damian.

There has been some loud criticism of the sanctuary that Damian runs ” people say that he doesn’t actually prepare the gorillas that live there to live in the wild. They point to a number of them that were killed very quickly once they were returned to their former habitat. So, that might make Kwibi an aberration. Five years is a long time to survive in the wild – and also raise a family, which a longer video shows Kwibi with children. For now, though, it looks like Damian did the right thing.

Do you feel like Damian’s just massaging his ego here or does he really have Kwibi’s best interests? Tell us in the comments and also, please ‘Like’ us on Pinterest. 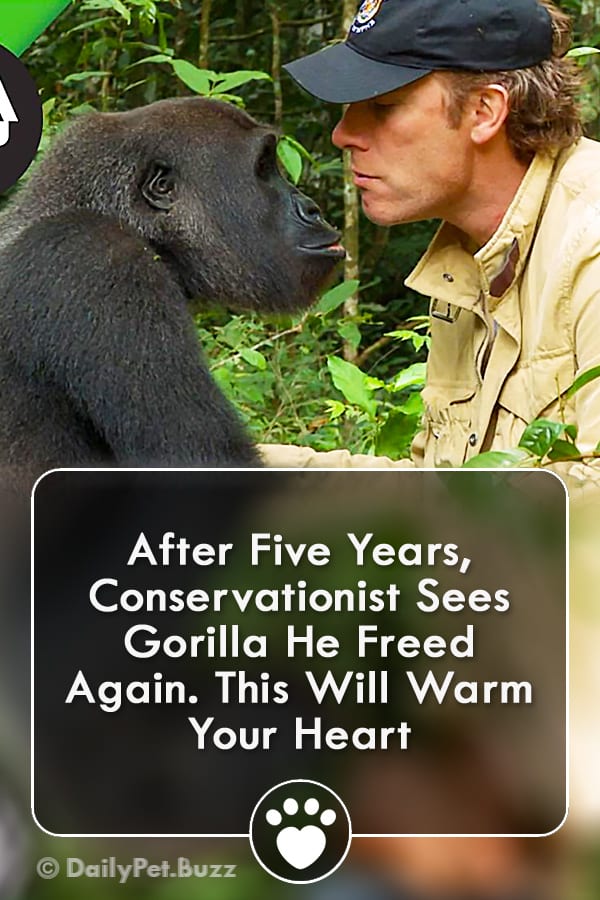