I love watching animals with new toys. Every time my cat gets something new, he goes nuts with it for a while. It becomes his whole world. Only the possibility that he might get food could disturb his concentration.

We see Plato, the Airedale Terrier, in his backyard. He’s got a brand new toy sitting in front of him. It’s a chipmunk. Actually, no, it’s a ‘chattermunk.’ It can repeat back what you just said. Yeah, I see that getting annoying REALLY quickly. Plato tries it on for size, barking loudly at this new toy that I have dubbed ‘Chippy.’ Chippy barks back at him the same way. Well – confusion registers on this dog’s face right away.

This poor guy just doesn’t get why this pint-sized chipmunk is making the same noises that Plato is – and isn’t intimidated by his size. Try as he might, the toy doesn’t run away. It just tips over and barks back at him. There are even a few moments where Plato seems to be deep in thought before barking again. It’s too bad that there’s no one around to walk him through it using the Socratic method. Just a little philosopher humor.

It did seem kind of mean to leave this out for him to play with. I guess his mommy or daddy thought he wouldn’t get bored of it. OK. I did laugh some at his reactions. Does that make me mean? I certainly hope not. At least Plato’s got a nice big yard to run around in. I’ve seen people keep Airedales in apartments. That’s not fair – they need to stretch their legs. Maybe

Isn’t this the cutest thing ever? I kept waiting for him to catch on – no dice. What did you think? Leave us a comment below! 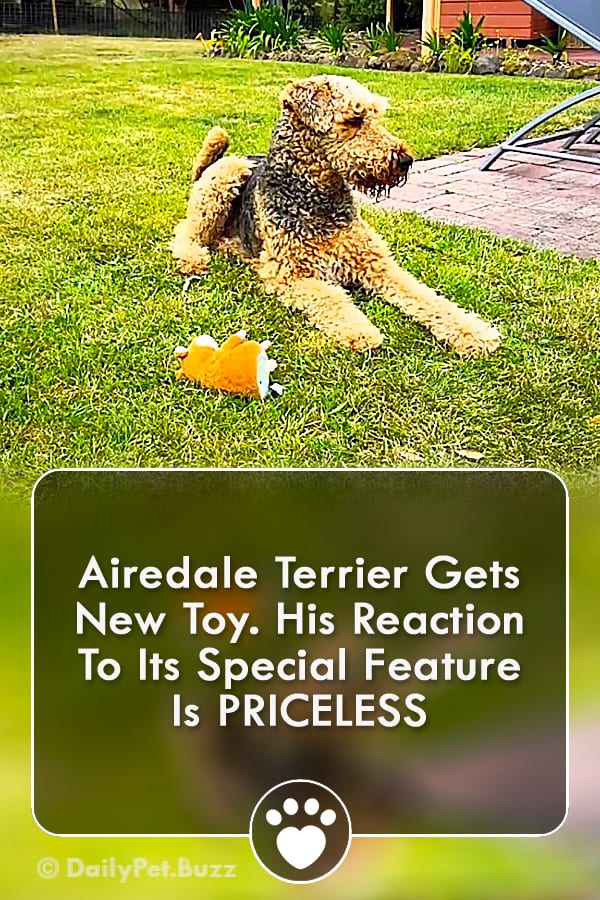