I love dogs, but when they know a trick or two, that’s icing on the cake! This beagle called Bailey knows a simple enough trick that many dogs know.  She knows how to ‘play dead.’ But when you see her do it, you’re going to crack up! She takes it to a whole new level by adding a bit of her own flare to the trick so it’s not like everyone else’s.

When David Letterman asked the owner Mike about beagles’ stereotypical ‘snarkiness,’ Mike said that they tend to have a mind of their own, but they are good dogs. Bailey had the whole crowd on the Late Show in hysterics when she performed her trick. When Mike walks out on the stage to join David Letterman, he is carrying Bailey like a baby and she’s facing the audience.

But the way he carries her is all part of the act. Mike is a bridge inspector in New York and Letterman kind of puts him on the spot asking him about the condition of Brooklyn’s bridges. He doesn’t seem to want to talk about it, but Letterman persists. It’s pretty funny, but the real show here is Bailey.

When Mike tells Bailey to play dead, she falls over into a heap in his arms. He’s only holding her with one arm and she’s totally limp. She looks up briefly and sees he’s not ready with the treat yet, so she goes back to playing dead! It’s hilarious! When he says, ‘Come alive,’ she raises up and is ready for her treat. So cute.

Watch Bailey’s terrific acting skills in the video above! What did you think of it? Let us know in the comments! 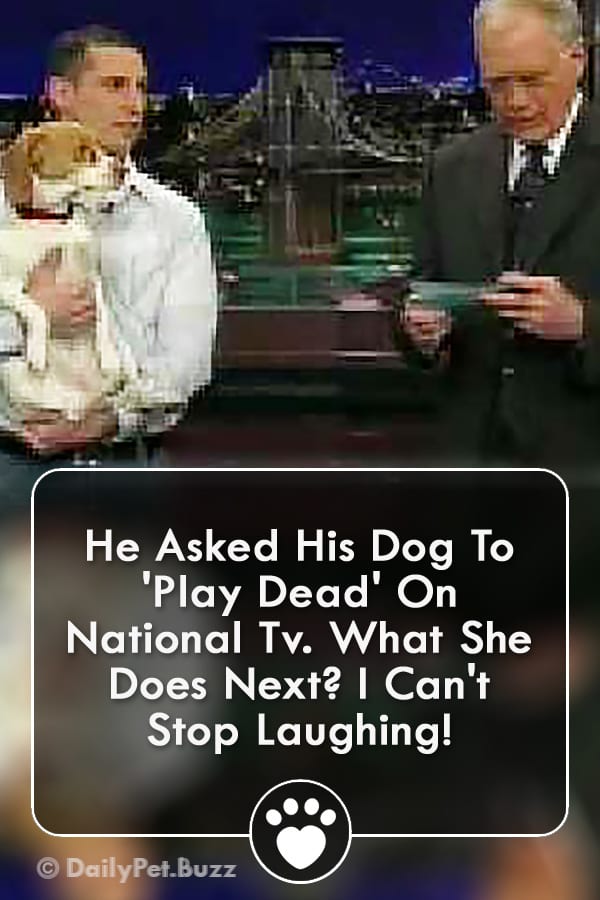