We all know the story of ‘David and Goliath’ , the underdog defeating the giant with a single stone and sling. Well the video above takes this story to another level indeed. In this case Goliath is a Great Dane named Vago, while David is a 12-week-old-Chihauhaua named Lilly. Unlike the original story, our David and Goliath are only playing, but are certainly drawing a crowd.

These two unlikely playmates met for the first time at ‘The Forks’ in Winnipeg, Manitoba Canada. And seemed to fall in love straight away. Lilly, being a small dog with what is commonly known as ‘small Dog Syndrome’ thinks that she is ten-foot-tall and had no fear whatsoever. Vago on the other hand, is just trying not to stand on her a squash their new found friendship. Just to be on the safe side, Vago’s person is keeping a sharp eye out to make sure no harm comes to either of them.

Friendships amongst animals have been seen on YouTube many times, all sorts of different creatures becoming friends in some of the most bizarre circumstances, but this cute-canine-courtship is just a little bit special. The size difference between these two soon-to-be-inseparable pooches is HUGE. In fact little Lilly isn’t even the size of massive Vago’s head. One slip of the tongue and bite size Lilly could be in big trouble.

Grate Danes are known to be a very gentle giant and this clip shows just how true this is. Vago senses that Lilly just wants to play and is very careful not to be too overwhelming for her, just lying on his side letting this mighty-midget do her stuff. At one point Vago even starts to flea Lilly on her tummy, a bit like a shark kissing a sardine, those teeth must look so big to a 12-week-old puppy, but that doesn’t phase out hero, and up she gets ready for more action.

The world has seen too many David and Goliath stories, where the underdog is not always the winner, but the giant with all the power bullies their way to victory. People mostly go for the little man in a conflict like this, but in the back of their minds there is already a doubt about who may preside and who may concede.

The interaction between this David and Goliath is so sweet to watch. It is amazing how two so completely different breeds of dog can get on so well, especially after only meeting for the first time. There almost seems to be a sense of fairness shown by the much larger animal, a thing that we humans could certainly learn from.

Click on the link below and just enjoy the moment that these two adorable-adversaries fell for each other. 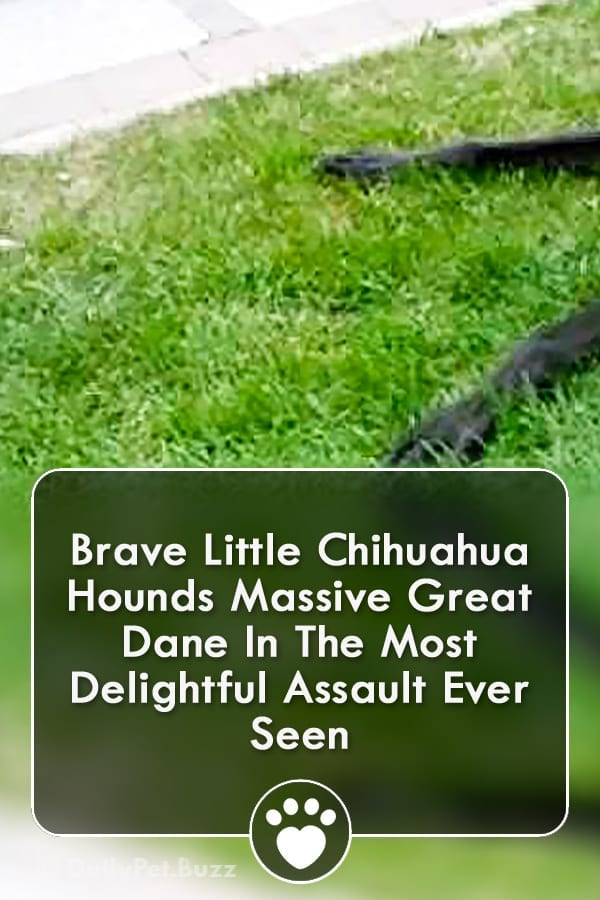