Fighting like cats and dogs, as they say. An old Russian folk legend claims cats and dogs don’t get along because the devil has tricked each into thinking the other has its rightful fur. Whatever the case may be, the two species really do seem to be naturally antagonistic. Maybe it’s just a clash of personalities. Dogs are super-sociable and in the wild, they hunt cooperatively in packs. Pet dogs see their humans as part of the pack, with one or more of the humans able to be the leader. Cats, on the other paw, are famously independent. In some situations, feral cats will form colonies but even then, they’re solitary hunters. A cat may deign to be your friend, but unlike a dog, it isn’t looking for a leader.

So we might say that dogs are good soldiers while cats are anarchists. Each animal has its virtues and either can make for a wonderful pet. But can cats and dogs be persuaded to get along and live together under the same roof? The answer is yes, at least with the right sort of human-supervised socialization. Not infrequently, you end up with the comical situation of a great big dog being thoroughly intimidated by a much smaller cat. It’s all about attitude.

The cat and dog you’ll see in the video we’ve posted below seem to get along pretty well. The dog is enjoying a nap but the cat thinks it’s time to play and does its best to wake the dog up. The gray tabby tries head-butting, then touches the dog’s paw with its own paw, then tries pawing at the dog’s head and ear. After rolling over in frustration, the cat curls up near the dog’s face and pokes at its shoulder. Throughout all this, the dog has been sound asleep! Not only that, but the cat now drifts off… 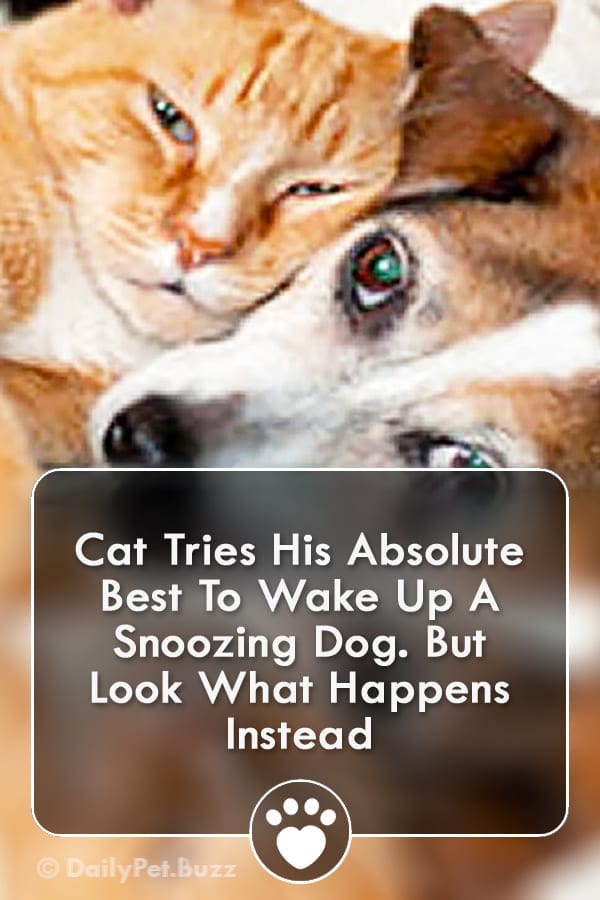