If you have pets in the house, sometimes you come home to a surprise. Sometimes the mess awaiting you is, shall we say, biological in nature. But there are all sorts of ways our four-legged friends can get into trouble when we aren’t looking: knocking things over, breaking them, shredding them, you name it. Sometimes they do this kind of thing because they’re lonely and anxious when we aren’t home. Running amok is a pet’s only way to channel all that nervous energy. Dogs are particularly prone to “separation anxiety.” That was certainly the case with the two huskies you’ll meet in the video we’ve posted below.

A British YouTuber known a Snowdog Guru is the proud owner of two very handsome huskies, Dakota and Phoenix. While he was out, a letter was popped through the mail slot in the door. When he came home, he was greeted by the Huskies and a letter that had been thoroughly ripped to pieces. It turns out it was something from the HRMC, Her Majesty’s Revenue and Customs, the British equivalent of the IRS. Maybe these dogs really hate taxes. More likely, they had separation and went bonkers when something happened, even when that something was just an envelope through the slot.

But did they both shred the letter or was it Phoenix or was it Dakota? Their dad certainly wanted to know, so he began questioning them. This really got them going, running around in circles and making lots of noise. Huskies are indeed famous for their howling. Dad kept calmly asking what happened, but the answer he got was just a frenzy of husky howling. Neither dog was willing to ‘fess up.

We doubt the punishment was very severe. These dogs are absolutely adorable and there’s really no way anyone could stay mad at them for long. 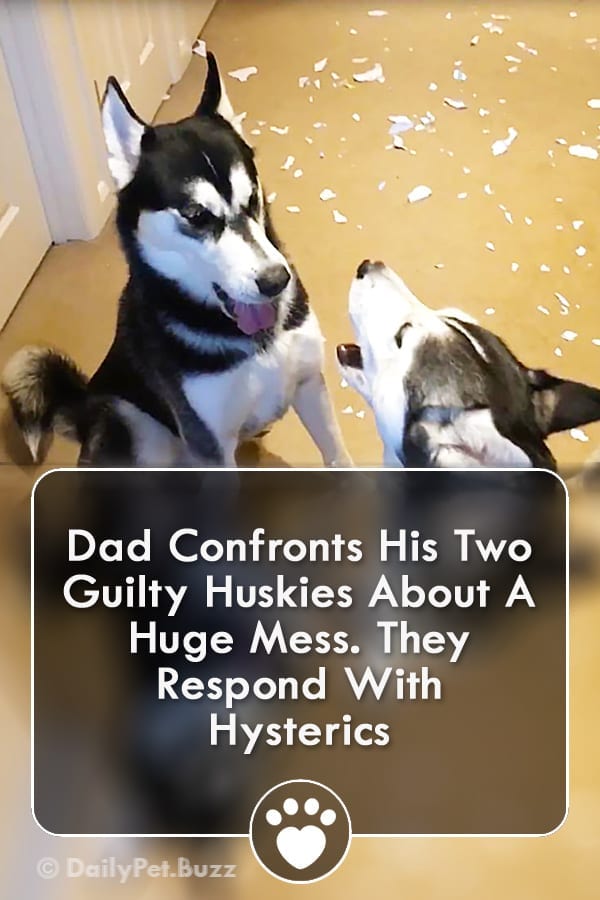