I think the results might have been different if someone tried to prank a Bengal Tiger.https://youtu.be/94gaBqQY1z8

Pranking people can be so much fun. There are countless videos of people doing everything from sticking a vacuum hose next to someone’s mouth to putting aluminum foil on every piece of equipment in someone’s office. Playing a prank on an animal can seem mean ” they don’t generally have the logical capabilities that we do. Though it if it’s pulled off successfully, it can leave the viewer in stitches. That’s the case here with a large German Shepherd and a toy tiger.

It’s just so funny to see this giant dog be SO scared of this stuffed tiger. Maybe on some level, he knows that tigers can be scary, even though he’s never met one before in his life. Perhaps a long-deceased ancestor, one who lived in prehistoric times, saw a saber-toothed tiger and passed that into his DNA. That’s pretty much the only explanation that I can come up for his excess of caution here.

You can almost see the dog’s thoughts coming out of his head as he does this. ‘Yipes. Better not get too close. OK, I’m gonna touch his paw. Grabbing it – AHHH! RUN! HE MIGHT CLAW MY FACE OFF! Hmmm – . Nothing yet. Maybe he’s sleepy after his long trip here. Let me check again – RUN! RUN!’ Maybe by day two, he gets used to his presence, but it doesn’t look like it happens that day.

To be fair to the doggie, this is a big toy. It’s not some rinky-dink tiny plushy. No, it’s a pretty good-sized one. It looks fairly lifelike. Ohh. Wait. I know what’s going on. This tiger is coming to life for this dog like Hobbes does in ‘Calvin & Hobbes.’ That explains it. This tiger is secretly talking to him, out of the dog’s daddy’s hearing range. There we go. Though if you really think I think that, I have a bridge to sell you.

Wasn’t this so adorable, though? Who was cuter? The German Shepherd or the tiger toy? I’m undecided. We’d love to hear your thoughts below. 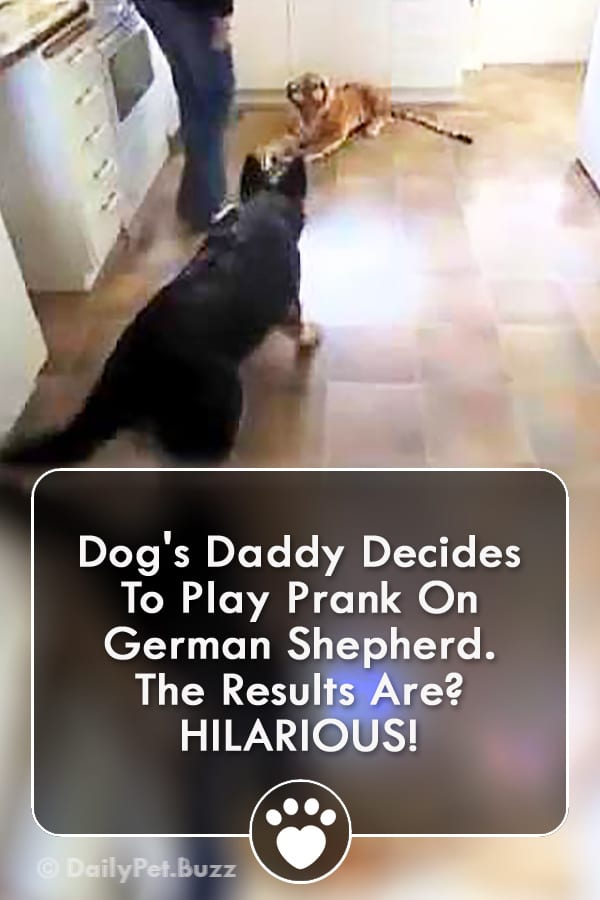