Regardless of whether you ride a horse as a hobby, compete in equestrian events, or just admire the majestic animals from the sidelines, you surely hate the idea of anyone getting violent with one. In particular, you’d expect people who work with horses full-time to be especially patient and professional.

Jockey Dylan Caboche, a 22 year-old apprentice rider, was anything but professional at a recent race in Port Lincoln, Australia. His horse, “She’s Reneldasgirl,” was being a bit rambunctious. The track assistants were having trouble keeping the horse under control, let alone easing her into the starting gate. The frustrated jockey suddenly dismounted and to the shock of everyone, pulled his fist back and landed a hard punch on the horse’s rib cage. The local racing authority suspended Caboche for two weeks.

The incident was broadcast on Australian television and provoked a storm of outrage from thousands of animal lovers. People were angry not only about what the jockey did but the lenient punishment. Along with all the outraged individuals, the Coalition for the Protection of Racehorses in Australia thinks that Caboche is getting off way to easily and should be banned from racing for life. According to its spokesman Ward Young, “You don’t get to punch a horse and get away with it. If jockeys can’t control their tempers, they don’t deserve to be on the racetrack. If this is what we see on race day, we can only imagine what goes on behind the scenes. Ask any punter, race-goer, or even diehard racing enthusiast — ‘Is a two-week suspension or $500 fine acceptable for punching a racehorse?'”

As for Caboche, he has at least admitted that he was in the wrong. “I understand what I did was completely unacceptable. Striking a horse is obviously not the right way to go about things, it was a brain fade and shouldn’t have happened”

What do you think? Was this jockey let off too easily? Let us know in the comments at Facebook and be sure to like and share! 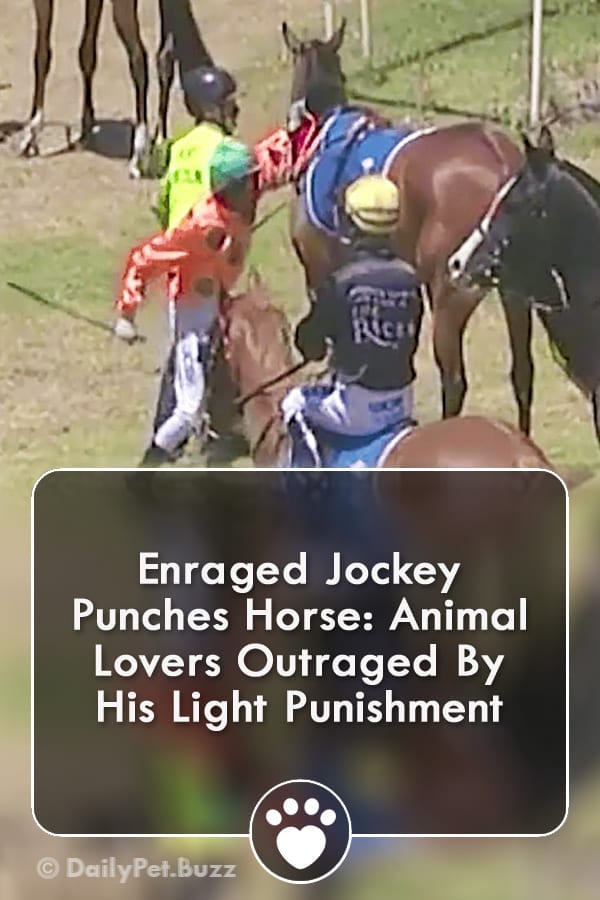