Puppies are an awful cute lot and this Siberian Husky pup just takes the cake. He may be small in size, but he’s sure got the guts to take on a raccoon as well as a cat which looks to be at least double his size! Watch how he takes on his housemates in a tumble which other creatures would fear to participate in.

It may be the Russian winters, but the creatures there sure seem to be larger than life when it comes to attitudes. This little puppy thinks he’s the Lion King as he takes on a raccoon that looks not only bigger, but badder and stronger too. Check out the nails on that raccoon ” you know that creature can do some serious damage if so inclined, but this little puppy seems to have no fear at all!

Firstly, I think the combination of having a dog, a cat and a raccoon in one house is a deadly recipe for disaster. Throw the equation of having a puppy around and you know something’s going to happen sometime, it’s just a matter of where and not when. However, after watching the video, it’s clear to see that the trio get along quite well and you can see the lazy cat who seems to be lounging in one place ignore the playfulness of the little puppy.

The raccoon, on the other hand is a different matter. If I didn’t know better, I’d say the raccoon was scared of the puppy, by looking at the way the little tyke pesters the creature. But the raccoon is bigger and badder, I would say he was getting a little irritated by the puppy’s annoying endeavors, but he also took care not to hurt the little one, which I think is adorable.

As the saying goes, ‘With great power, comes great responsibility’ and the raccoon was obviously taking care to avoid the puppy. If these three weren’t enough to cause mayhem and havoc in one household, I saw one other cat in the video later as well!!! This household sure loves their pets!

Well, the playfulness of the trio was adorable and watching the little one climb over the cat, blissfully unaware that he may be a nuisance made me smile. Did you watch the video? What did you think of it? This really made my day and hope it made yours too! SHARE with your friends to spread the joy and send us a message in the comments section below. We love hearing from you! 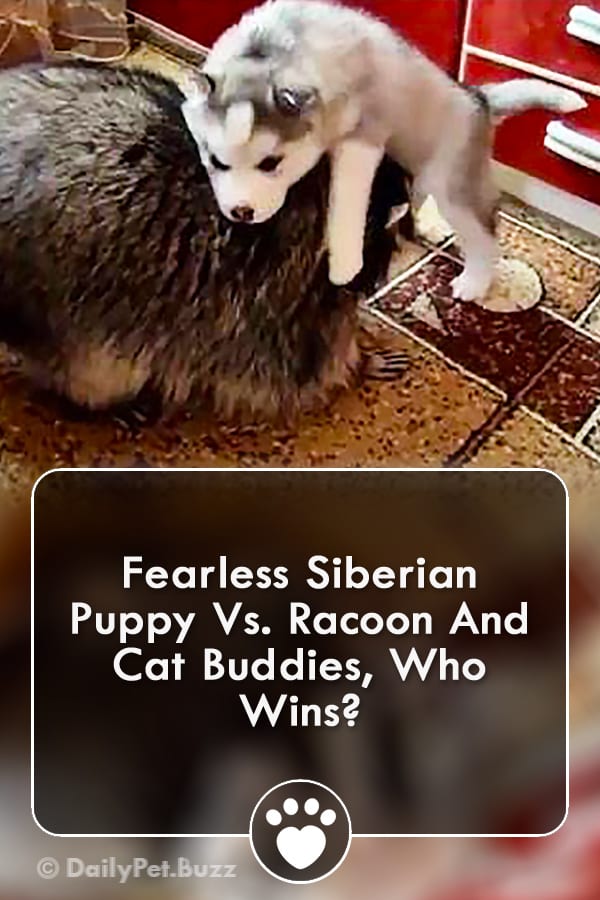