Dogs can be great babysitters for kids sometimes. They know how to entertain them and sometimes they like to just cuddle next to them and try to keep them warmer on a cool night. Of course, it should go without saying that there should be a babysitter for the ‘babysitter.’ In other words, don’t leave the dog alone with the kid. By being around, you get to record great videos like this.

The video starts right into the action. We see a German Shepherd in a dining room, holding a squeaky toy near a baby boy. He’s biting the toy and shaking it a bit, making it squeak. The boy can’t get enough of it, laughing loudly. The two of them seem to be bonding quite nicely. Mommy is sitting nearby with a camera, filming this. It’s a fun scene to behold, even though it’s not a terribly long video.

The dog holds the toy above the baby, almost like he was playing keep-away with the baby. ‘Here – you’ve got it. You’ve got it. You’ve got it – No. You don’t got it. HA HA.’ The baby can’t get enough of it, laying on the floor, his boppy pillow nearby. The dog clearly wants to entertain him. Maybe he gets paid for his role as a babysitter in doggie treats. ‘OK, I watched him for 20 minutes. That’s three dog treats. Three. Don’t try to give me two. I bite you if you try that.’

Some think that the German Shepherd was trying to kill the frog toy to have the baby eat it. That might be right in some ways, but it’s still endearing that the dog was trying to bond with the baby. There are some who also derided the mommy for leaving the dog alone with the baby. It’s obvious that the mommy is right there. It’s not like she got this from a nanny cam later on.

Did you have a dog bond with your baby like this? If so, we’d love to hear about it. Please tell us in the comments below! 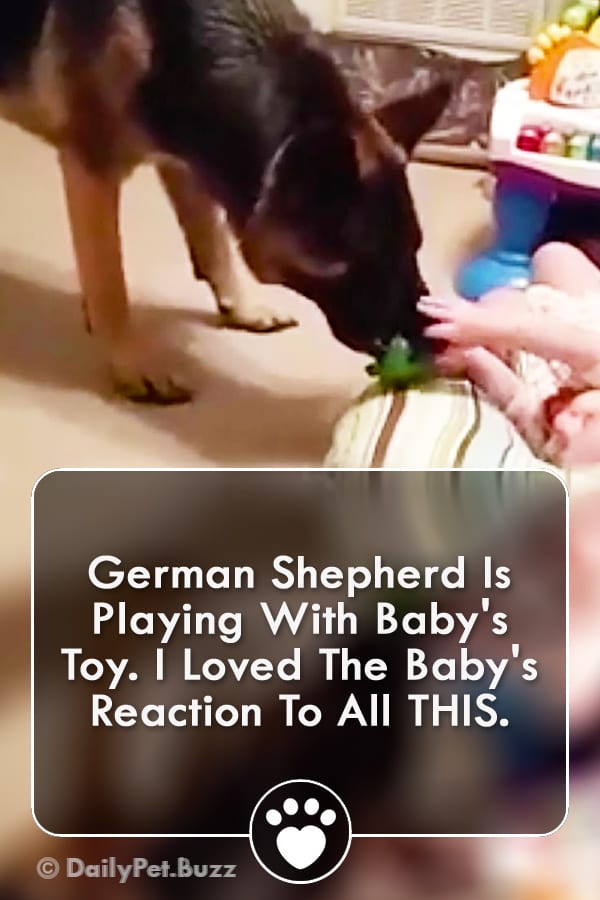