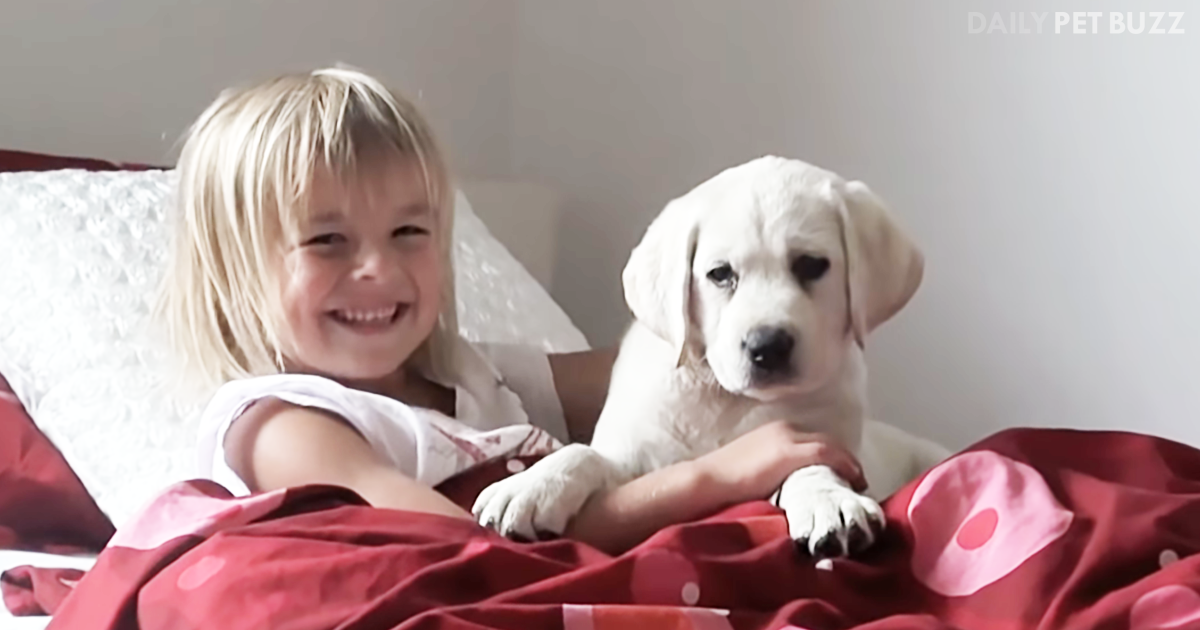 I don’t usually like videos that seem to just drive toward a certain website, but this is just one is so cute that it made me watch the whole thing. I’m a sucker for little puppies – what can I say? This puppy in this one ranks very high on the cuteness scale – in fact, he probably breaks it. Don’t believe me? Take a look for yourself.

We see a scene of a white velvet Labrador retriever – also known as the English Labrador, lying on a bed with a little girl. The two of them are having a blast. The puppy has gentle eyes and a great demeanor. While the scene may be staged so as to get people to come to the kennel or the website, they do seem to be enjoying each other’s company. It’s a great showcase for the breed’s temperament towards kids.

This looks like one of the sweetest puppies I’ve ever laid eyes on. Then again, their behavior is also contingent on how they are treated by others. The little girl in this video obviously treats the puppy right, since he’s all over her, licking her. This is one dog that’s eager to please. I’d probably spend hours rubbing his belly.

Hopefully, the people that have this website for their kennel have had success getting people to bring them into their homes. I’ve never seen a white velvet Labrador puppy before – such a cute doggie. I’m sure that any that happened to be in a shelter would be adopted quickly.

This puppy adores the little girl that he’s with. Labs always seem to make great family dogs, so this would be no exception. It’s a pity that we’re not allowed to have dogs where I live. I might try to get some cat ears and record some meows. Don’t miss this absolutely precious duo in the video we have posted below.