A puppy is like a toddler. A toddler who never grows up. They have to be told multiple times when not to do something, and just like a toddler, they push back sometimes. This video, starring a VERY peeved bulldog name Bentley, shows such an example. Try not to laugh when watching it, though. Bentley was very aggrieved during the filming.

The video starts off with Bentley wanting to join his owner on the sofa. He was rebuffed and told to stay on the floor. Well. He did NOT like that at all and proceeded to let everyone in the house know while barking repeatedly at his owner. He did this for a little bit and then got even louder and aggressive ” though in a very cute way, not in a ‘Run! It’s Cujo!’ way. Then his eyes took on a pleading look. No dice.

When I took my introductory psychology class in college, I learned about the five stages of grief. I even made an acronym for it ” DABDA. That meant Denial, Anger, Bargaining, Despair, and Acceptance. Bentley went through that whole thing in a minute. First, he couldn’t believe he wasn’t allowed on the sofa. He then got mad, or as mad as a tiny puppy can. Thirdly, he seemed to be bargaining. ‘You do this and I don’t pee in the corner for a week.’ Despair soon set in. ‘I’m NEVER getting on here again!’ Finally, acceptance. ‘Oh well. Look! Something’s on the floor!’

Something tells me that Bentley finally got his way. It may not have been the next day or the day after, but eventually he’ll probably be watching his video on a laptop while sitting next to his owner on the sofa. Dogs can wear anyone down. I know, because the dog I had while growing up wasn’t allowed on the bed. OK. That lasted all of three weeks. I mean, three days.

This was SUCH a fun video. It made me want to get a bulldog. Watch the video and tell us if you were able to resist getting one. We want to hear from you! 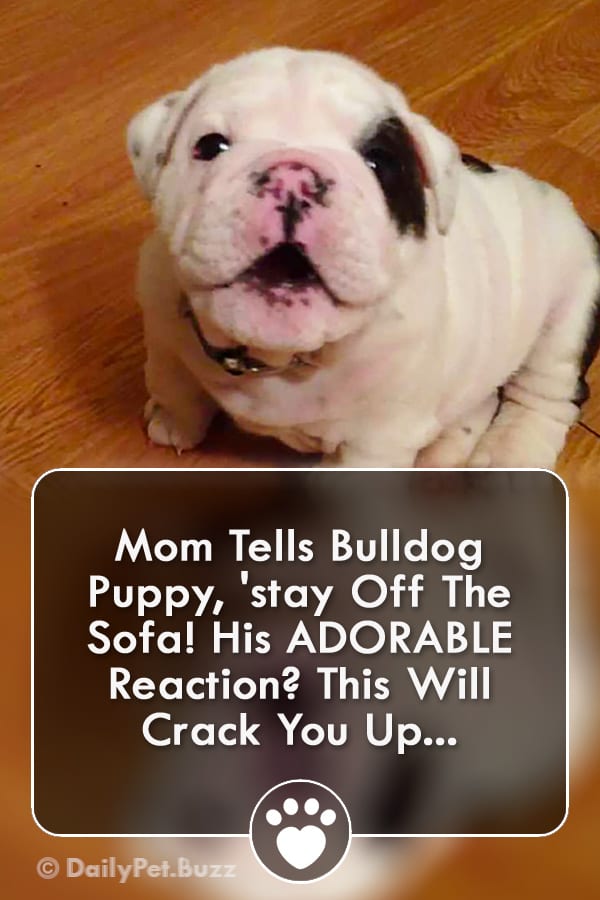