Dogs don’t have to be the same size as each other to be able to have fun playing with each other. Of course, one of the dogs has to understand his or her own strength so as to not accidentally knock the other one into the next week with a playful blow. It’s also fun seeing the two friends show that size doesn’t matter. Take a look at this video here, for example. It’s so much fun to watch.

We see a full-grown pit bull playing with a chihuahua puppy. The pit bull’s not inclined to much, he just lays on the ground and gently pushes the pup away if he feels that the chihuahua is nibbling too much on his face. He knows that this is a baby and he’s not going to do anything to harm the little guy. The pit bull is having fun, though, you can tell by his relaxed demeanor as he’s on the floor.

The best part is when the pit bull gets up and stretches out. Suddenly the chihuahua pup’s gone. He’s looking around like, ‘Hey, where’d he go? I wanna play more!’ It’s one thing when the big guy is lying on the ground, being lazy, but the pup does have a sense of self-preservation, because if that pit bull accidentally lands on him, it’s going to be pain city, that’s for sure.

Of course, there were a lot of misinformed comments on the YouTube page. Well, ‘misinformed’ is not the word I would use to describe them, but I’m going to be nice here. They were calling the pit bull a fighting dog and that putting the chihuahua puppy in the same area was dangerous. This pit bull’s a total mush. The only way he’d ever become a fighting dog was if some miscreant trained him for that. Other than that, they are wonderful dogs.

Both of them look like they are having so much fun. Have you had a pit bull act the same way with another dog of yours or children? Tell us all about it in the comments section. Also, please ‘Like’ us on Pinterest. 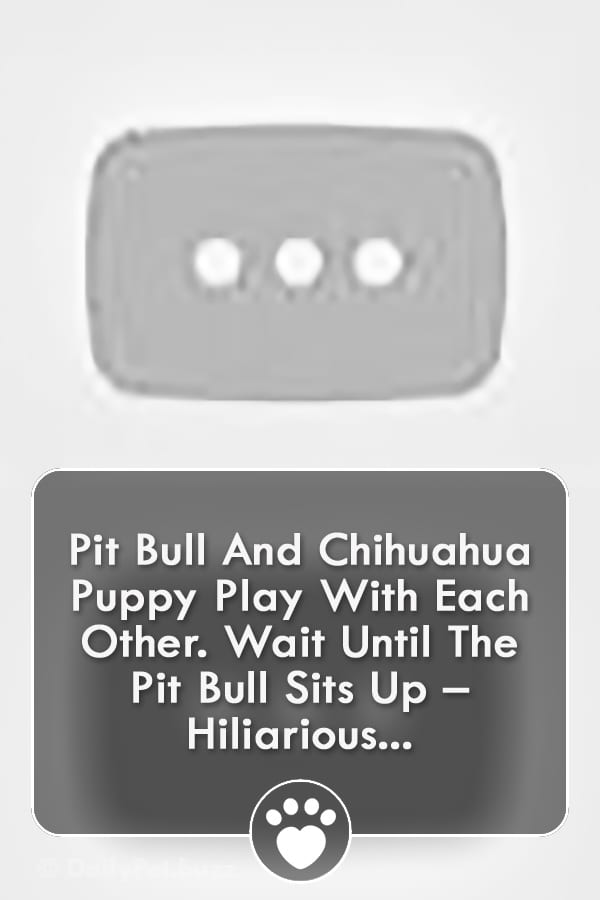