The newest internet sensation has come from the unlikely source of a Franciscan monastery in Bolivia! When this adorable stray pup wandered into the holy order, maybe he knew it was a place where he could find sanctuary! The friars there welcomed him with open arms ” and had a real treat in store!

Instead of turning the animal away back out for a life on the streets ” as so many animals have to suffer ” these kind-hearted friars decided to adopt the pooch, and even found his own costume to wear! The brothers have since named the lucky street-dog Carmelo, but his nickname is ‘Friar Bigoton’ ” which of course means ‘moustache’ in Spanish! It’s a great moniker for the playful fur ball, who appears to be a Mini Schnauzer with his fantastic, walrus-like facial hair and wonderful temperament. It’s clear these friars have a sense of humour too!

Kasper Mariusz Kapron OFM posted the photographs and was delighted to discover they went viral when the news story caught on. and the message of Friar Bigoton was heard around the world! Especially as Carmelo was giving his own doggy robes to wear so he could really fit in with his new family! He must have felt right at home as he’s seen clearly enjoying his new surroundings and receiving some much-needed love and attention from his new brothers.

But there is a more serious side to the monastery adopting Carmelo, as they try and encourage other holy orders to do the same. St Francis of Assisi was the patron saint of animals after all, and these friars want to promote such adoption to help curb Bolivia’s ” and South America’s significant street dog problem. Taking Carmelo in with love and care is just a small step in the right direction ” but those animal sanctuaries and shelters really do need more help.

Meanwhile, Carmelo is adjusting well to his new life at the monastery ” bounding around the grounds happily and appearing to enjoy wearing his monk’s habit! It really is incredibly cute! And the friars say he even enjoys preaching to the monasteries’ fish on the odd occasion, as he’s seen curiously inspecting their central fountain. Or perhaps he is trying to eat them ” we’re not 100% sure!

Don’t miss this adorably cute video of Friar Bigoton’s continuing adventures ” and we hope that the real message is heard loud and clear ” and more monasteries start to adopt animals to save them from their plight on the streets. 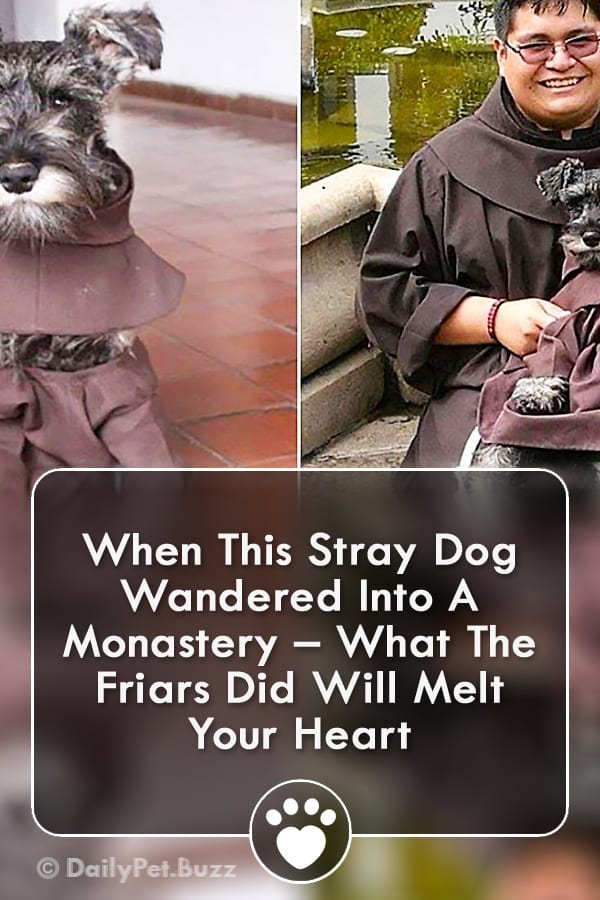