Pit bulls are great dogs with a terrible reputation. Although any dog is really only as mean (or nice) as its owner, most people are convinced that pit bulls are vicious and aggressive by nature. There’s an element of guilt by association thanks to irresponsible owners. Pit bulls are popular in the world of underground dog fighting and are also the dog of choice for urban troublemakers. But as you’ll see in the video we’ve posted below, pit bulls can be tame, gentle, and loving.

The Los Angeles area animal rescue organization Hope for Paws got a call about a stray pit bull that had just given birth in someone’s yard. Although it was after dark, a team from Hope for Paws rushed to the scene. The dog was frightened of all the people and did her best to run away. But they finally got her cornered and looped. She was making a sad face, and yet at the same time seemed relieved to feel a friendly hand petting her. The next task was to go get her newborn puppies. She’d given birth to five of them, but sadly, one of them had already died.

Mama pit bull and her four surviving puppies where whisked to the animal hospital where they got checked out and were given baths to get rid of fleas. But then mama pit bull came to a staffer, put her paw on their lap and started whining, clearly indicating something was wrong. An x-ray revealed a bottle cap in the dog’s stomach. They wanted to avoid subjecting a dog that had just given birth to surgery, so they decided to see if they could get her to cough it up. Fortunately, that was successful, if slightly messy. They decided to name mama pit bull Lexus and stuck with the automotive theme for her puppies: Beamer, Prius, Mercedes, and Cooper. 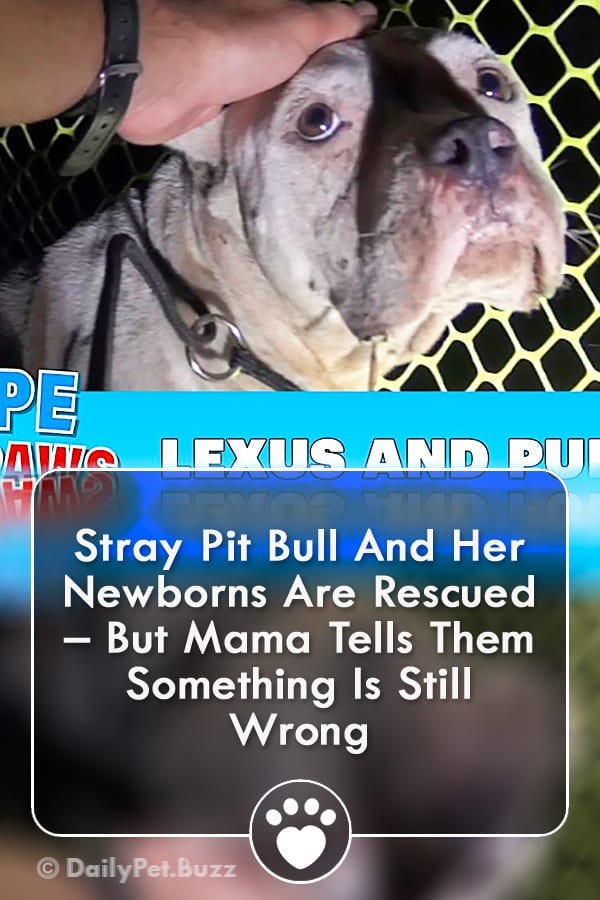