When you were a kid, your probably had a favorite stuffed animal you were intensely possessive of. It might well have been a teddy bear. Although bears are large, frightening forest creatures, they turned out to be a wonderful basis for children’s stuffed animals. The story goes back to the early 1900s. Working independently of each other, the American toy designer Morris Michtom and his German counterpart Richard Steiff invented the first teddy bears. The name was borrowed from President Theodore Roosevelt — a famous political cartoon of the day showed him refusing to shoot a bear in an unsportsmanlike fashion. Michtom sent the president one of his company’s stuffed bears and asked if Roosevelt would mind if he called it a “Teddy bear.” Roosevelt actually hated being called Teddy, but he was so charmed that he made an exception and told Michtom he didn’t mind at all.

Of course, stuffed animals aren’t just for children. Pets love them, too. A perfect example of this is a dachshund named Arvo. His favorite toy is a teddy bear that’s bigger than he is but his doesn’t stop him from dragging the bear everywhere he goes!

Dachshund means “badger dog” in German and hunting badgers is exactly what these dogs were bred for. A dachshund’s long, thin body, short legs, and large paws certainly enables it to chase a badger right into its burrow. When hunting, dachshunds are ferociously determined to get the job done. That may explain why Arvo is so willing to put all that effort into dragging his big teddy bear around with him. As you’ll see in the video posted below, this little dachshund likes to nap in his carrier — with his teddy bear, of course. Getting his bear into the carrier isn’t exactly easy, but Arvo keeps at it, making the most of his distinctive dachshund size and shape.

How did you like this hard-working and determined dachshund? We’d love to hear your thoughts in the comments at Facebook. Be sure to like and share: you’re friends will get a laugh from this obsessed little dog! 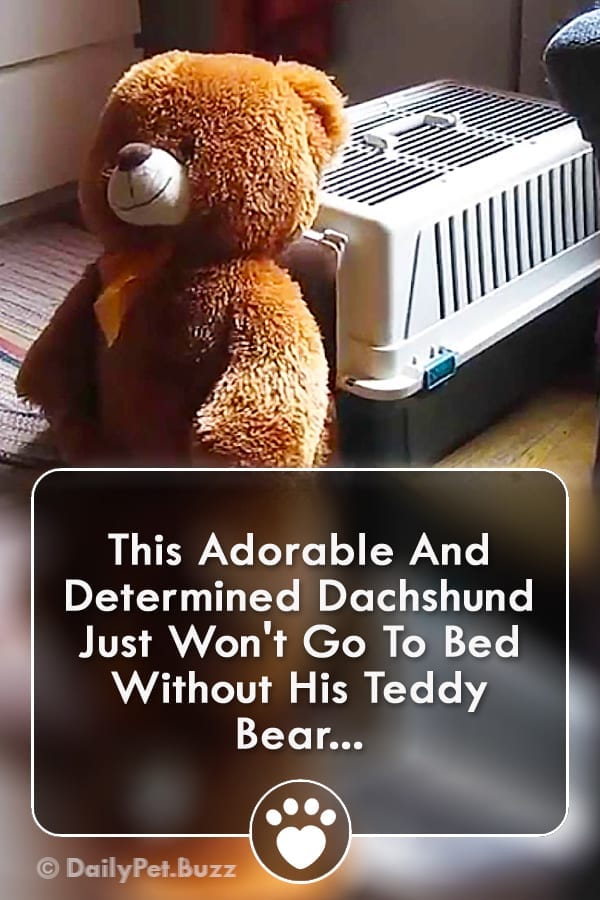