Babies are SO cute. That’s a given. But sometimes they can be a nightmare when they aren’t getting their way. Their crying levels can rival those of jet airplanes flying above. But then there are times when they can be adorable when trying to convince their mommies or daddies to do something for them. They adopt the most persuasive tone and temperament – well, for as long until they realize they STILL aren’t getting their way. Watch this video of one such instance.

We see a baby girl standing in front of a sofa, CLEARLY unhappy that a bulldog has taken her spot. This is apparently her favorite place to sit and she wants it back. Rather than do anything like try to grab the dog, she tries to reason with him with a very loud dissertation. It’s like he’s a judge and she’s a lawyer on a sidebar. She might have gotten this from watching an episode of ‘Law & Order’ on TV.

Here’s what I gleaned from the baby’s argument: ‘I have spent MANY an hour enjoying this spot on the sofa that this DOG has taken from me! I had my first baby snack here! I watched my first episode of Sesame Street here! I was burped for the first time here. Don’t act like I don’t remember! Hey! He’s lying down! Make him move!’ She’s definitely going to be a lawyer at some point in her life.

What’s even funnier about this is how calm the dog is during the whole tirade. He’s just like, ‘Yeah. Yeah. Yeah. Baby whining. Don’t care. This is my spot now. Deal with it. I’m going to go to sleep. What’s she going to do? Move me? Yeah. Right.’ It would have been interesting to see the baby’s mommy try to move the dog, since bulldogs can be rather – intractable when they have no desire to move. I bet that the dog won the argument that day.

Wasn’t this baby adorable? I would have tried to get the dog to move. How about you? Weigh in with your thoughts in the comments section! 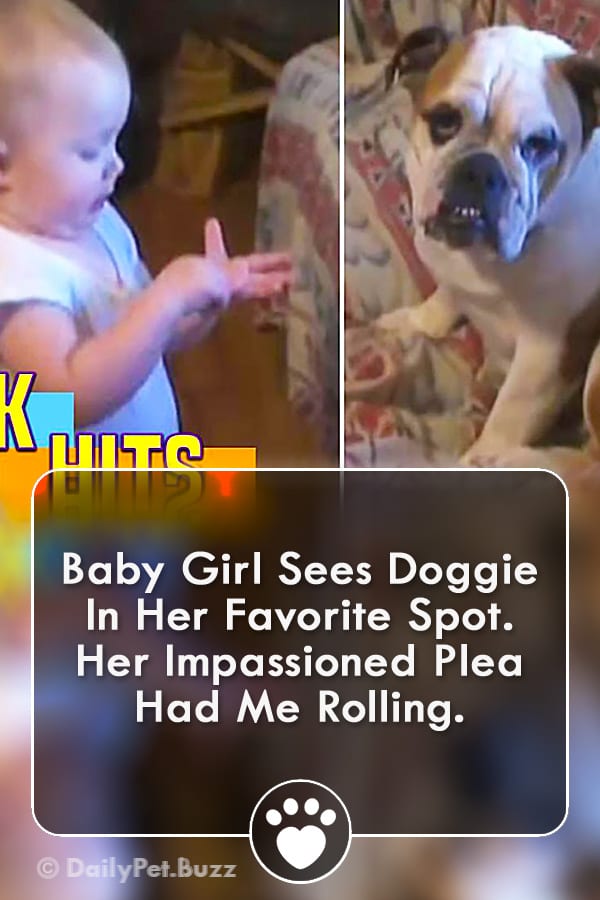