Some animal rescues have just been too painful to watch. The most recent ones we showed, involved mostly dogs. Like a dog in India who was found hairless and with very painful sores. Even when the rescuers carried her she would be crying in pain. These rescuers often do a fantastic job of giving these animals a second chance at life. Fortunately for this dog, everything turned out on a very positive note.

All her hair grew back and after several weeks of treatment and medication, she was as good as new. The next video is one of the most painstaking rescues we have ever shown. At first glance, the rescued animal doesn’t look like he’s in bad shape. The animal we’re talking about is a baby orangutan. His name is Budi. He was rescued very recently and although the initial examination did not show anything wrong, he was in pain.

Upon closer examination, the rescuers find out that he has been fed with condensed milk. That’s all he was fed. This has terrible consequences. For starters, his limbs get bloated. They look as if someone has injected them with water. This bloating is a direct result of the diet the baby has been put into. This has also severely malnourished the baby orangutan.

He is so weak that he is not even able to sit straight. Every position seems to be painful for him. The rescuers also know that they need to be very sweet and gentle with him. Love can work wonders in a recovering animal. Especially when he has been kept in a cage for that long.

To take care of his sores, he must be strategically positioned on pillows. Lying down on pillows doesn’t make the pain go away, it just makes it less painful. As you watch the video, you can hear the baby’s cries because of the pain he’s in. Seeing this, one must imagine how cruel a person needs to be to have an animal go through all of this. His recovery has been taking several weeks. It’s much more serious than they had initially foreseen. After a few weeks, his caretakers feel that it’s safe for him to interact with other animals.

The first interaction they set up is with another orangutan. They feel that this is going to help him gain a little bit of confidence and interact a little bit more. When every day is painful and everything you do seems to hurt, socializing seems like a logical alternative. Under the watchful eye of his caretakers, Budi makes a remarkable comeback. Watch the video of when he first meets another orangutan. His reaction is priceless! 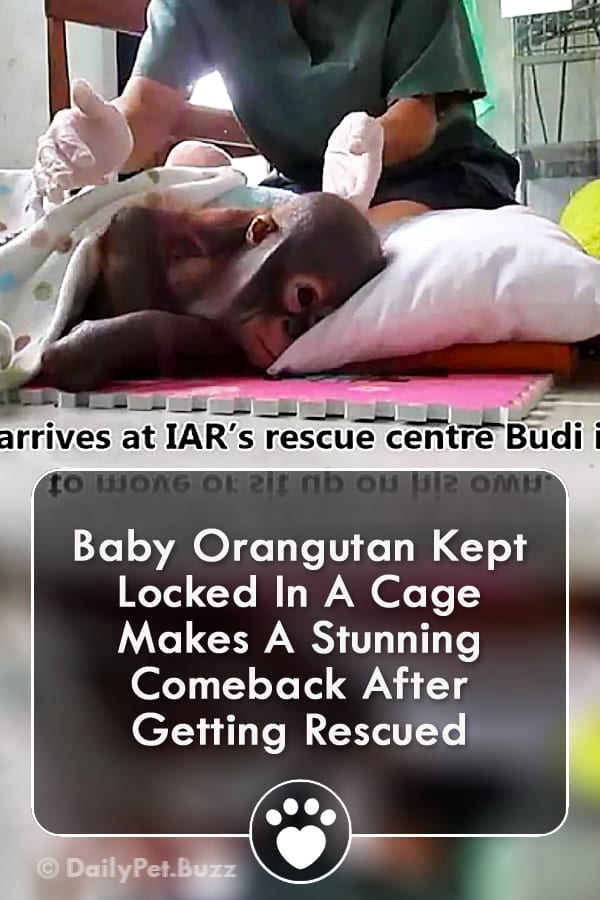