Great Danes are awesome dogs. I have fond memories of one that lived next to my aunt in Florida. He was a six-month-old puppy at the time and he could clean my face in two licks. He would do it while standing on his hind legs and resting his front legs on my shoulders. It was awesome being in the presence of something so big. That’s why I love this video about a dog named Lizzie who holds a unique record.

This pooch resides in the Guinness Book of World Records as the world’s tallest living female dog. That last part is important. I wrote about a male before. This is for the opposite gender, so no angry comments below. She lives in Florida, which is great since it’s known for having a lot of houses with large backyards. I feel bad for ones that live in apartments, unless they get regular access to lengthy times at dog runs.

Lizzie looks like the world’s most laid-back dog. She’s got to have a very long fuse – though I wouldn’t want to be around her if something ever happened to make her truly angry. In fact, being on the other side of the country sounds like a good idea, don’t you think? This is a sweetie though, and her size makes her all the more endearing, don’t you think so? I’d love to meet and pet her.

Ever know someone who didn’t know their own size and strength? They might shake your hand and think that they were doing it gently but you find yourself hoping that there are no broken bones? That’s Lizzy. She goes with Greg to a dog park and even he finds himself shocked at how large she truly is compared to other dogs. Imagine her playing with a chihuahua? She might inadvertently knock one to the adjacent dog park –

What do you think it would be like to have a dog like Lizzie around the house? Forget about having much sofa space to yourself. Have you had a Great Dane yourself? Tell us all about it in the comments section. Also, we’d love it if you ‘Like’ us on Pinterest. It’d make us feel big, too. 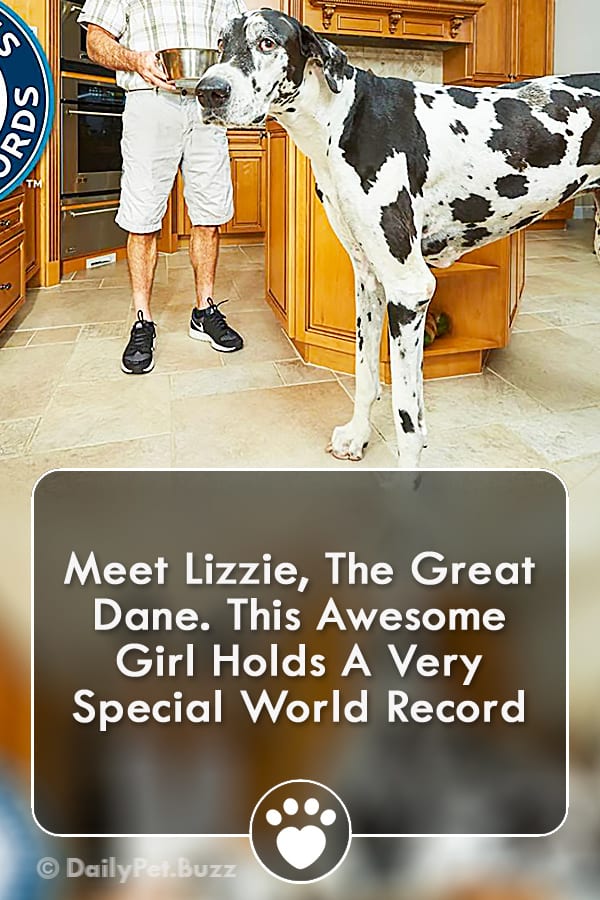