There are many things that people may not like when they first try it. Coffee, for example. Certain brands of beer. Some foods. Wines. It takes a bit for our taste buds to accept it – or we may never wind up liking it. I’ve never liked coffee, for example. The same might be true for animals. They might not like a certain food, but if they try it a few times, they like it. The dog in this video is putting that theory to the test.

We see a puppy licking a lime wedge while his mommy and a friend look on. They are at the beach. I am jealous watching this because there is snow still on the ground as I type this. He licks it – and then snaps his head back a couple of times when the citrus hits his taste buds. Perhaps he thinks this thing is an acquired taste – though it’s going to take several repeat attempts to get that.

The puppy has a mode of thinking far different than what most people would do. If I tried something that tasted weird, I wouldn’t keep licking it – especially since it’s been in the sand. Yeah, I know – I’m weird that way. Then again, I’m also not a puppy. It’s hilarious to see him throw his head back after each try. It’s like ‘Oh. Strong! Let me try again!’ I would have given up after a second try.

This puppy is determined to get to the bottom of what this lime wedge is. Yes, citrus can be toxic to animals. No, this is not cruel to the dog ” he would have to eat the whole lime for there to even be a danger. This is a lime slice that was in a drink and has also been squeezed out. There are a lot of finger-wagging people that like to play armchair vets, but there are professionals that post on the page saying that it’s safe.

Are there certain foods or drinks that you’ve never liked, no matter how many tries? Tell us all about it in the comments section. Also, please ‘Like’ us on Pinterest! 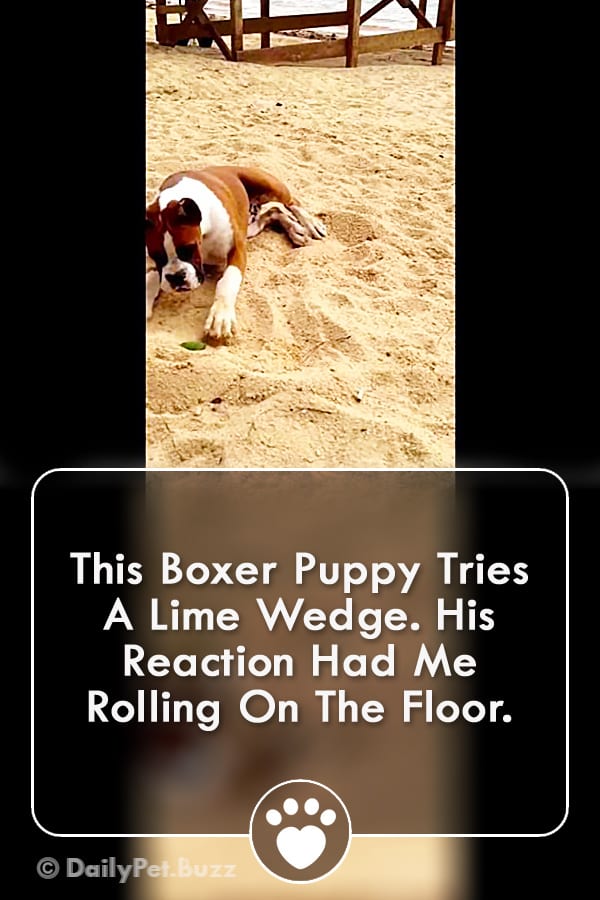