Like many an old expression, “fighting like cats and dogs” has a solid basis in reality. It really does seem like cats and dogs are natural enemies. They just don’t get along. This could stem from a clash of personalities. Dogs are very social, true pack animals. For a pet dog, the humans are the other members of the pack and if one of the humans is the leader of the pack, that’s fine with the dog. Cats are wonderful pets, showing love with purring, head-butting, and kneading. However, they are loners at heart. In the human-cat relationship, there isn’t really a pack and if there’s a leader, we all know who that is! In sum: a dog is a good soldier while a cat is an eccentric but lovable anarchist.

Can two animals who are so different live together under one roof? Often they can, but a lot of… coaching… may be required. It may not end up being a relationship of equals. Even a large dog may end up living in fear of the cat’s wrath. Nevertheless, dogs and cats can form close friendships.

In video posted below, you’ll see a cat and a dog who seem to be pretty good friends. There’s an amusing role reversal: this time it’s the dog who’s taking a nap and the cat who wants to play! The gray tabby seems absolutely determined to wake the dog up and pulls out all the stops: head-butting, pawing at the dog’s head and ear, and even touching the dog’s paw with its own. Frustrated, the cat rolls over but hasn’t given up just yet. Maybe curling up near the dog’s face and giving its shoulders a few pokes will do the trick? Nothing doing; this dog was serious about napping. Do we even need to add that at this point the cat drifted off to sleep?

Did you get a chuckle from this cat’s utterly futile attempt to wake up the dog? Let us know in the Facebook comments and don’t forget to like and share. 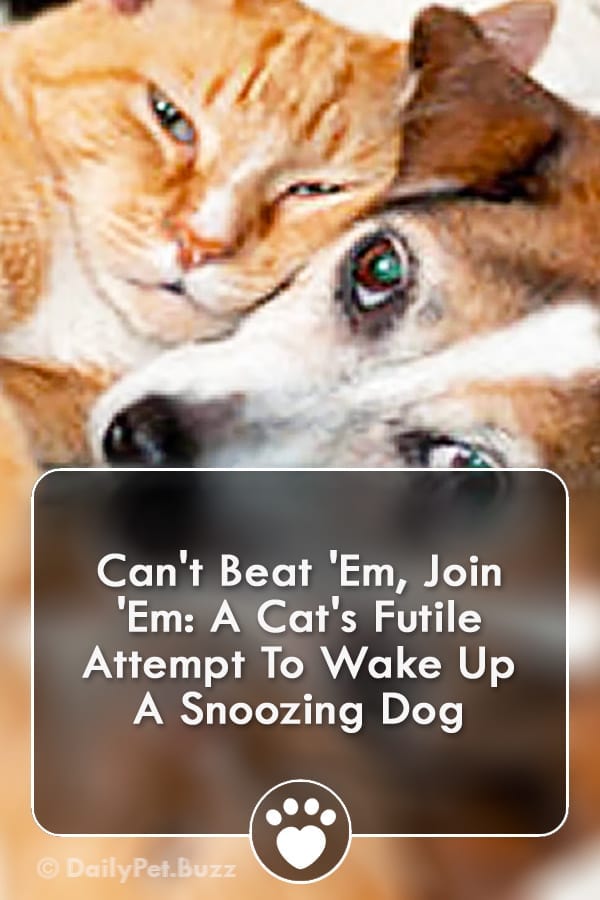