When it comes to jobs, ‘Designated Bear Scarer’ is one that ranks very low, if at all, on the list of the ones that I would accept. My employment situation would have to be very dire for me to even contemplate interviewing for it. Even then, I might blow the chance if they asked me where I wanted to work. ‘As far as possible from bears.’ ‘Next!’ Mishka, a Karelian Bear Dog, doesn’t mind this.

What does this job even entail? One must go to a container which has a bear that has become too domesticated and scare them into getting their wild instincts back. I mean, what could a human say? ‘YOU KEEP THIS UP, YOU’RE GOING TO TURN INTO YOGI BEAR!’ ‘Whimper…’ ‘WORSE, YET – YOU’LL TURN INTO BOO-BOO BEAR!’ ‘GROOOOOOOOOOWL!’ ‘RUN! He’s RIPPING THROUGH THE STEEL!’ No, Mishka just stands outside and barks a lot at the bear inside. It seems to work since he still has a job.

Mishka’s profession isn’t the real story here, though. He makes a new friend one day, a baby deer who thinks that he’s his daddy. Far from correcting the deer of this mistaken assumption, he actually takes the role of parent quite seriously. The fawn loves him dearly…. get it – a deer loving dearly. OK. Tough crowd. She adores him so much that she even sticks her nose in his mouth at one point in the video. Yeah. No idea on that one either.

The two of them bond quite well. I hope they have many more years to bond together. What would be fascinating is if Mishka brought the fawn to work as kind of a ‘Bring Your Kid To Work’ event. ‘OK – bark! Oh – wait, you can’t bark. Fine – turn around and bang on the container really hard with your hooves. There you go – scare that bear! Yeah!’ That would be the oddest work duo ever –

What did you think about the whole Bear Scaring thing? I guess it has to be done. Aren’t Mishka and the fawn so cute? Tell us your thoughts in the comments and please ‘Like’ us on Pinterest. 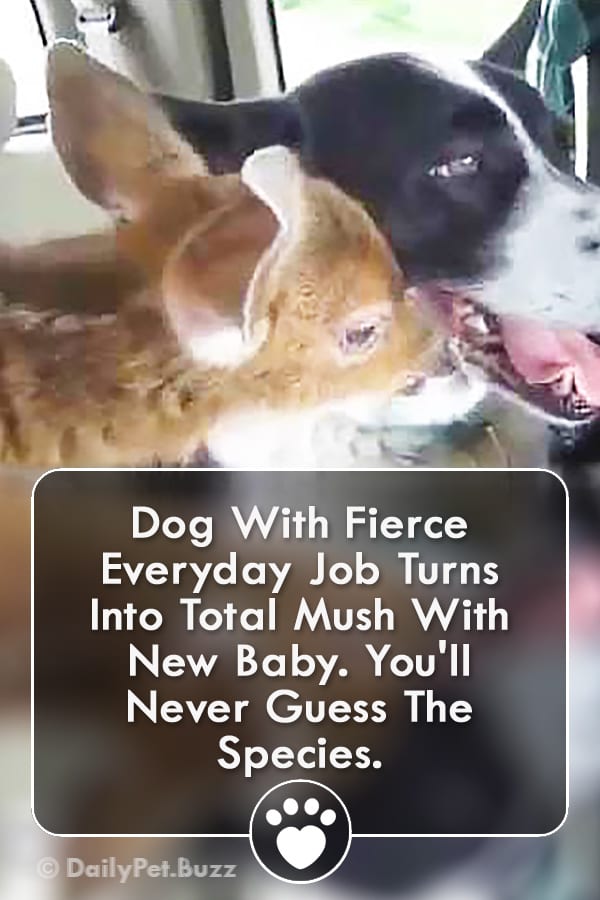