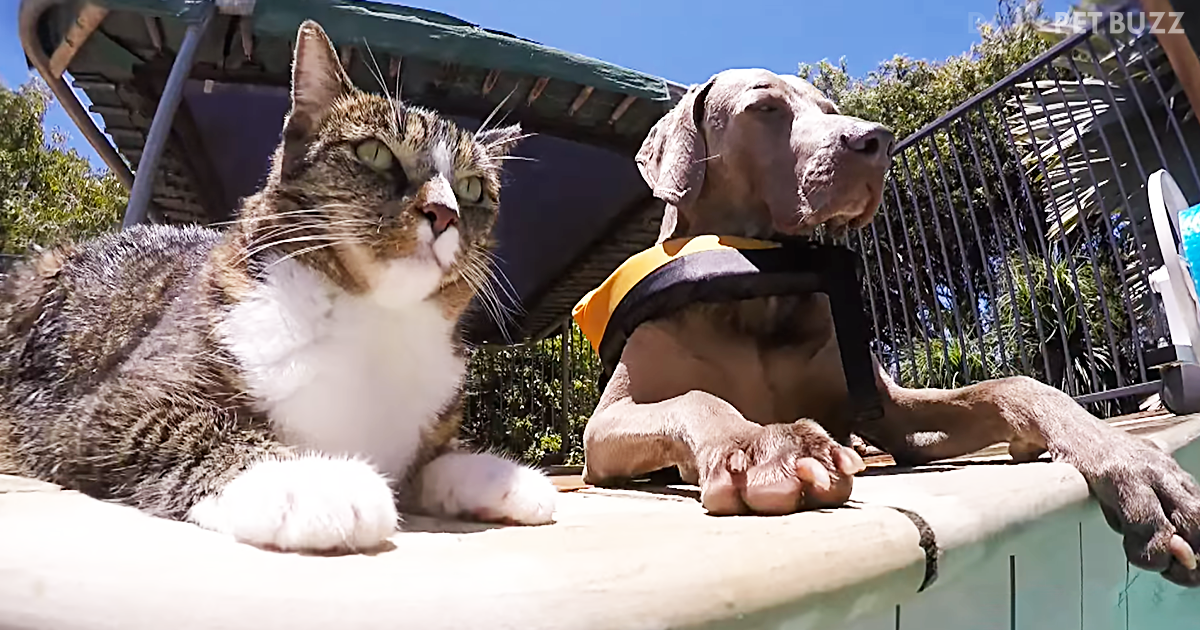 It’s always fun to see two animals coordinate together for tricks and other things. First off, they have to form a bond to be able to even get to the point of working together. It’s like two actors – if they don’t get along, then everything that we see isn’t going to be genuine. It’s hard enough when they are people. Imagine what it’s like to try to get a cat and a dog to co-exist long enough to do something together?

Well, it worked for this video. We see Didja, a well-known YouTube star, and Ice, her canine buddy. Both of them wait for their daddy to open the door to let them go to the pool. They can’t rush there fast enough. Ice is wearing a life-jacket of some sort. Ice is a very good swimmer and starts doing some laps.

Didga eyes him for a little bit, gauging his speed and getting herself ready to do something pretty cool in a few moments. Didga loves to jump onto Ice’s back and have him swim from side to side, where she leaps off and then comes back around for him to let her jump back on again. She even spends time on one of the pool floats too.

This is one cat that is NOT afraid of water in the least. They spend a decent amount of time in the pool together. This is obviously not their first time doing something like this. The best part of the video isn’t even Didga and Ice cruising around in the pool. I loved the end of it when the duo is catching some rays on separate lounge chairs, with Didga sprawled out on her back. Talk about relaxation. It’s winter where I’m living, but it made me think of the impending spring and summer.

Ice is understandably tuckered after carrying a cat around on his back all day – I don’t know who was cuter: Didga or Ice. This is only one of many videos of Didga, but I love this one as Ice swimming is just a hoot in itself. I love all his swim gear. Check out the video below and see if you can decide if you have a favorite of the two.