There are few things that I am more jealous of than people who are lucky enough to have a hot tub that they can sink their aching bodies into after a long, hard day of work. I have fond memories of using them. Sadly, the place we live wouldn’t accommodate such a thing. So, I have to live vicariously through videos like the one that we see here – even though it shows a dog in the tub rather than a human.

We see what I guess is a puggle named Cuzzie leaning back against a hot tub jet. He’s thoroughly enjoying it, since he’s making a sound that I can best describe as happy growling. It’s almost like a motor. This pooch does NOT want to budge. Truth be told, I can’t blame him, since those jets can feel SO good on your back. Ah, man, I want to use a hot tub now, but I don’t think that’s such a great idea, given that it’s -10 outside now.

One thing’s for certain ” Cuzzie’s going to sleep REALLY well later on. This is one content doggie. I don’t think he’ll give anyone a problem later. ‘Dinner time? Sounds good.’ ‘You want to use the sofa now? Go ahead, be my guest.’ ‘Want the bed to yourself? That’s fine, I’ll just sleep here on the floor because I am SO relaxed – ‘ Though his mommy or daddy might have to drag him outside for a walk since he’s so relaxed.

There were some people worried that Cuzzie may have hurt himself in the tub, pointing out the red parts of his neck. The person who uploaded the video said that was red dye from his collar. He wound up staying in there for only five minutes. This was not a frog staying in boiling water type situation. Also, would a dog named ‘Cuzzie’ let himself get in trouble in a Jacuzzi? Didn’t think so –

Didn’t this make you want to use a hot tub? I’m going to use my only other option and go take a hot shower. We’d love to hear your thoughts on Cuzzie. Leave them in the comments section. Also, please ‘Like’ us on Pinterest. 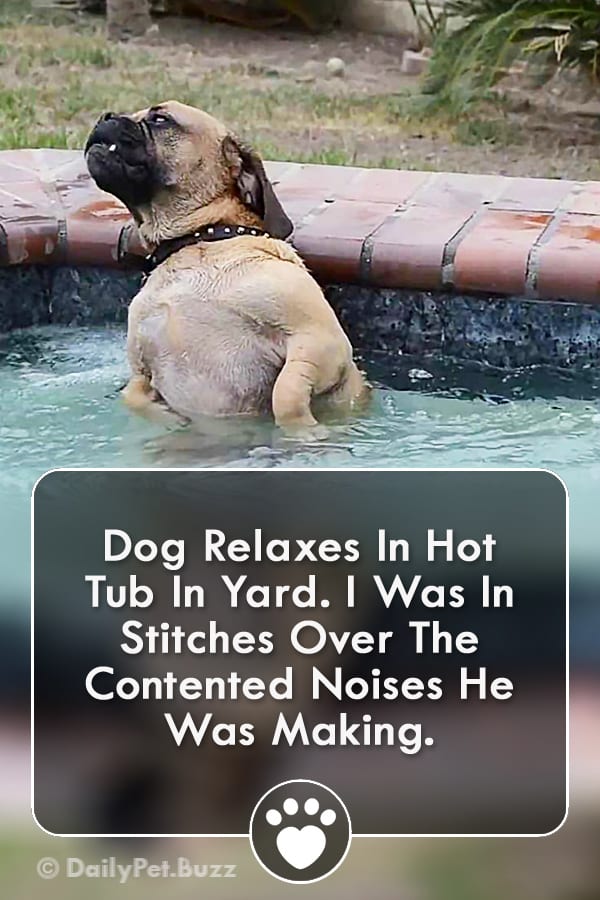