There have been many times in our lives when we’ve had mistaken identity. You’ve tapped someone on the back thinking that they were a friend of yours, only to find that they are a complete stranger who has the same haircut and body build as your friend ” that’s going to happen in a world with several billion people! This video, though, takes the prize for the wackiest mistake.

We see a dog with a bandana around his neck bring a toy – to another toy, a large Elsa doll from the movie Frozen. He doesn’t know that this is not a living, breathing person – and he wants to play fetch with her. Of course, being non-sentient, she just sits there with the toy by her side. He whimpers, confused as to why his play efforts are being rejected. Why? He’s adorable! He even wore the bandana to make himself look better!

The funniest part to me is when, like a drunk person at a bar who thinks he has a chance with a woman out of his league, he bares his teeth at the husky who comes over to see what’s going on. ‘Get outta here! I’m talking to her!’ ‘Dude, she’s not even REAL. She’s a doll!’ ‘YOU BET SHe’s A DOLL! SHe’s GORGEOUS! I’m going to play fetch with her! Scram! You’re cramping my style!’ ‘sigh. Whatever, dude.’

I was rolling on the floor at the whole thing, though a part of me felt bad for the pooch at one point. He really wants to play, and a part of him has to feel rejected. Then again, I thought dogs had good hearing and he should be wondering why he’s not hearing a heartbeat or breathing coming from her. Then he should be trying to alert the others that someone’s not breathing. This dog seemed to be behind the door when doggie common sense was being handed out –

Didn’t you think this was funny? Should someone have alerted the pooch earlier? Ah – why ruin all the fun? Let us know your thoughts in the comments section. Also, please ‘Like’ us on Pinterest. 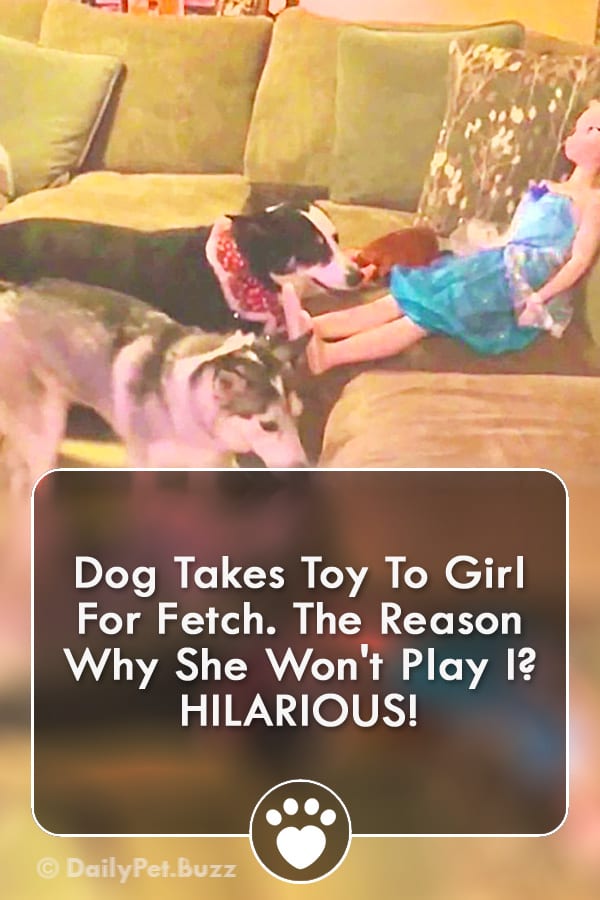