Parent dogs playing with their pups are fun to watch. It’s a challenge for the bigger ones who often dwarf their babies, to harness their strength in order not accidentally to send their babies flying halfway across a lawn. It’s great fun for the little ones, too, who learn social behavior in the process.

This video shows one such instance of a canine playing with his brood. It’s so much fun to watch. We see a German Shepherd confronting his puppies in a snowy park area (though, with all the snow, it could just be their yard). The pups are under a car at first, but then they come out since they see their dad is in a playful mood. He’s constantly crouching forward in a sign that he wants to play.

At first, the little ones don’t pick up on his mood, but then it’s like a lightbulb goes off in their heads, and they charge headlong after him, giving him a chance to work on his backward walking. It’s like he’s saying, ‘YEAH! LET’s PLAY! Oh – wait – I didn’t realize that there were so many of them. Retreat!’

All the little pups have figured out that they can band together against daddy. It’s like almost an entire defensive line – well, a Pee-Wee football defensive line – trying to sack a quarterback. All of them are having a blast in the snow, and it’s great daddy-puppy bonding time. A lot of times, a dog dad gets a bad rap. They are usually thought of as being aloof and dismissive of their children. That’s clearly not the case here with this pooch and his brood. He adores them, and he wants to make sure that they have fun. It’s not like these pups can just lay around and play a console game all day on the television.

German shepherds are supposed to be active dogs, and this dad certainly keeps his pups occupied with his running around. If I did that with my son, I’d be in great shape – You are going to find this so much fun to watch. Don’t forget to click the video below for a clip full of puppy-happiness. 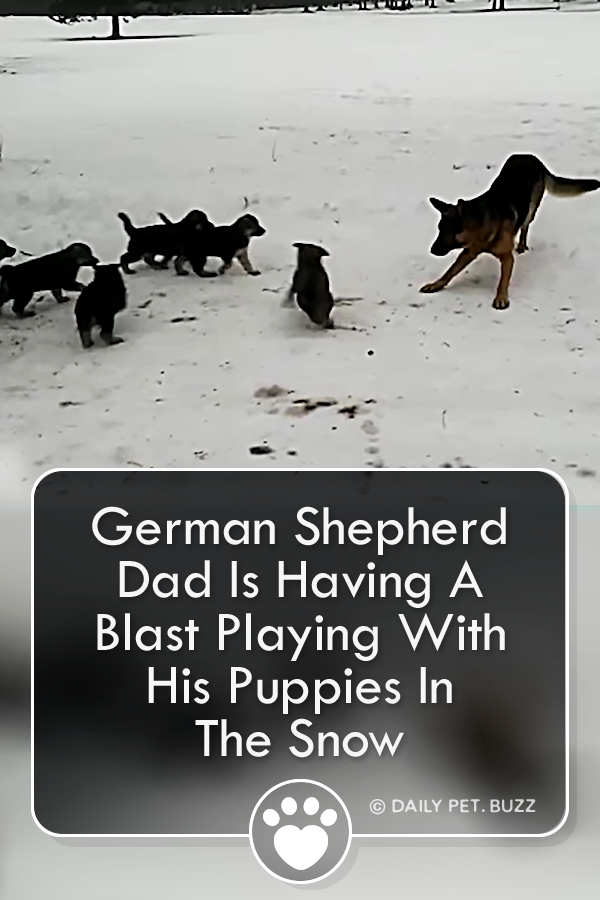