Where were you when you first heard the news that you were going to have a new addition to the family. Those moments are etched in your brain for all of eternity. They better be, because it’s up there with wedding anniversaries, birthdays, and some holidays. The people in this video will remember – because the dog’s reaction to the news is impossible to ever forget. Not that you would want to. Just watch and you’ll see what I mean.

We see a Golden Retriever sitting on his daddy’s lap. The daddy says, in a low voice, ‘soon, you’re going to have a baby brother.’ The dog’s head snaps to the side with a confused expression. The dad seems to be stifling his laughter and looks at the camera and back at the doggie. The person with the phone moves to the right to get a head-on look and the daddy repeats the same phrase twice, both times earning the hilarious response.

The expression on the dog’s face is priceless each time he hears ‘Baby brother.’ It’s just a perfect encapsulation of ‘Wha?’ I know that Golden Retrievers can be very smart, but I don’t think he truly understands what the words ‘baby brother’ mean. Maybe he does, and I’m not giving him enough credit, but I still think it’s just a reaction to the sounds that his daddy is making. That’s my opinion and I’m sticking with it.

At first I didn’t know if it meant that his daddy was going to be bringing another puppy into the fold or if it meant that his wife was pregnant. A follow-up video, which has far too few views, shows that it was, indeed a human baby, since there’s a mommy holding her newborn baby as the Golden Retriever lays nearby, watching the baby while his tail thumps on the floor, a sign that he’s happy with this circumstance.

Wasn’t this pooch so adorable? What was the most memorable pregnancy announcement you ever heard? Tell us all about it in the comments section. Also, please ‘Like’ us on Pinterest! 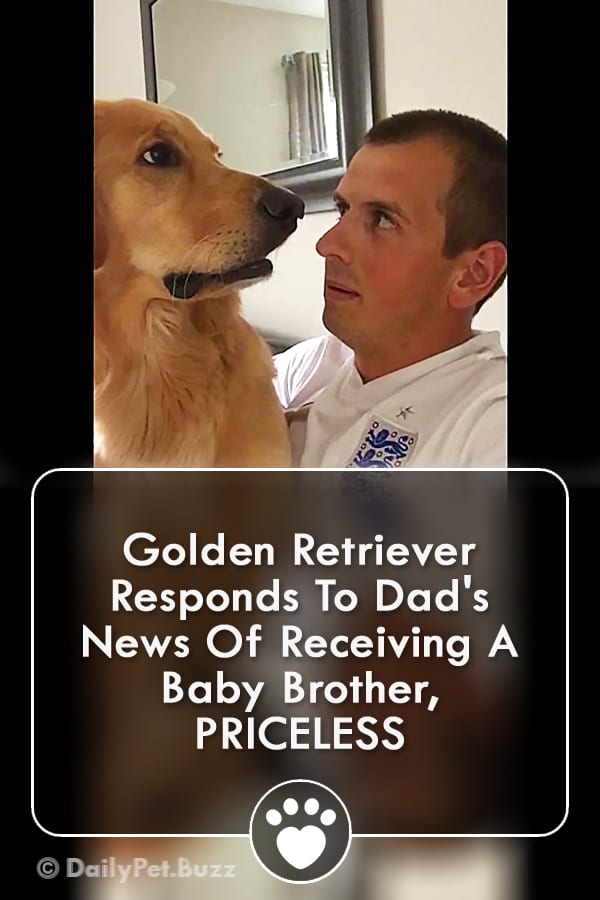