The intelligent and talkative cockatoo is actually a member of the parrot family, although with plumage in a much more muted color scheme. There are fully 21 different species of cockatoo, native to various parts of Australia, New Zealand, New Guinea, the Solomon Islands, Indonesia, and the Philippines.

Like many other parrots, cockatoos have an incredible ability to mimic sounds, including human speech. This is one reason people have long enjoyed keeping them as pets. Cockatoos are astonishingly brainy and are even capable of solving complex mathematical puzzles.

In captivity, these remarkable birds have been known to live to be 70 and sometimes even 80. Keeping a cockatoo as a pet is a major long-term commitment and isn’t for everyone. But if you’re up to the job, a cockatoo can be a truly amazing companion.

The video we’ve posted below stars a cockatoo who was so sociable, that he wanted to fit in with the cats that he shared a home with. Cats and birds aren’t usually friends, and it’s pretty obvious why. Cats may be cute and lovable, but they slay several thousand million birds every year, and that’s just in the United States.

Nonetheless, this intrepid bird was determined, and he had a brilliant strategy. The three cats were sitting on the bed, watching suspiciously as the cockatoo boldly paced back and forth. Then the bird started meowing. The cats were utterly baffled. This thing looks a lot like a potential lunch, but it sounds like a fellow cat.

When things got just a little tense, the cockatoo outdid himself by letting out a perfect feline hiss. This aggressively friendly cockatoo may not have convinced the cats he was really one of them, but he certainly gets an A for effort. 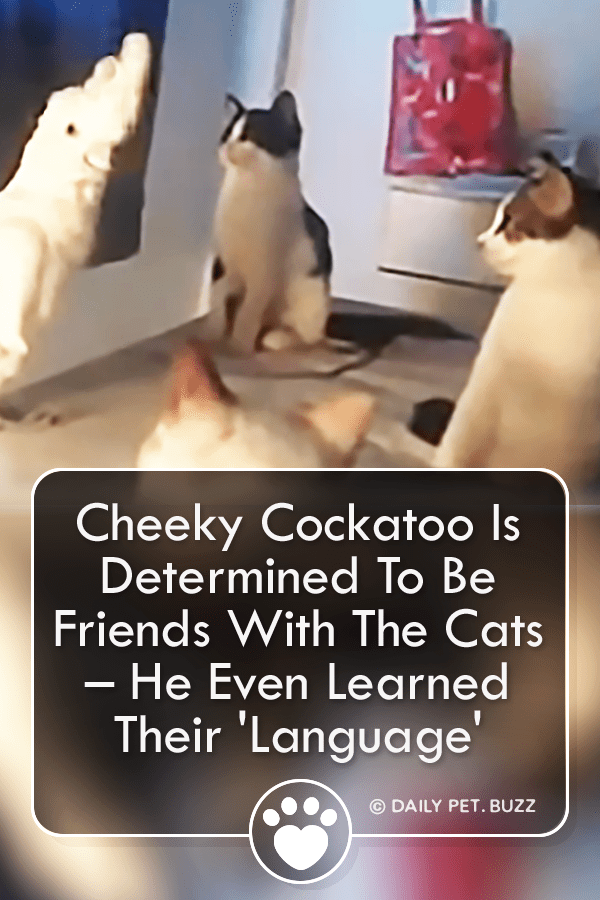