If you’re ever in need of a laugh, all you have to is fire up this video. It’s short, but I just can’t stop laughing at it every time that I see it. I’m even snorting to myself now just THINKING about what I just watched. It’s just all so perfectly set up with the most hilarious ending ever. Oh. I’m just going to stop here and tell you to watch this thing first before continuing. Otherwise, it’s not going to be the same.

You watched it, OK? C’mon – if you didn’t watch it, just writing out what happened isn’t going to have the same effect. OK, we’re all good? This video just seems like something straight out of ‘Home Improvement.’ The man who narrates the video even sounds a bit like Tim Allen, doesn’t he? I was waiting for Al Borland to show up and just smile while waggling his eyebrows after that whole debacle.

This is perfect ” the guy is panning the fence that he just built with his video camera, and you can almost sense his chest swelling up with pride as he surveys his work. The fence looks sturdy, though one commenter did note that there was no baseboard. That doesn’t come into play though. He comments that this was built so that he could keep his dog in the yard – apparently, he has boundary problems.

Then, as if on cue from the gods of hubris, comes his dog, who looks like a medium-sized German Shepherd runs up to the fence – and with barely a pause, leaps over it. The man pauses for a second, shocked at what happens, and then with near-perfect timing, mutters, ‘Dammit.’ He doesn’t say this in an angry way but almost in a bemused and resigned way. Oh well, back to the drawing board!

Have you had something like this happen when you try to keep your pooch from roaming to areas that they shouldn’t? We’d love to hear your stories! Tell us in the comments section and also, please ‘Like’ us on Pinterest. 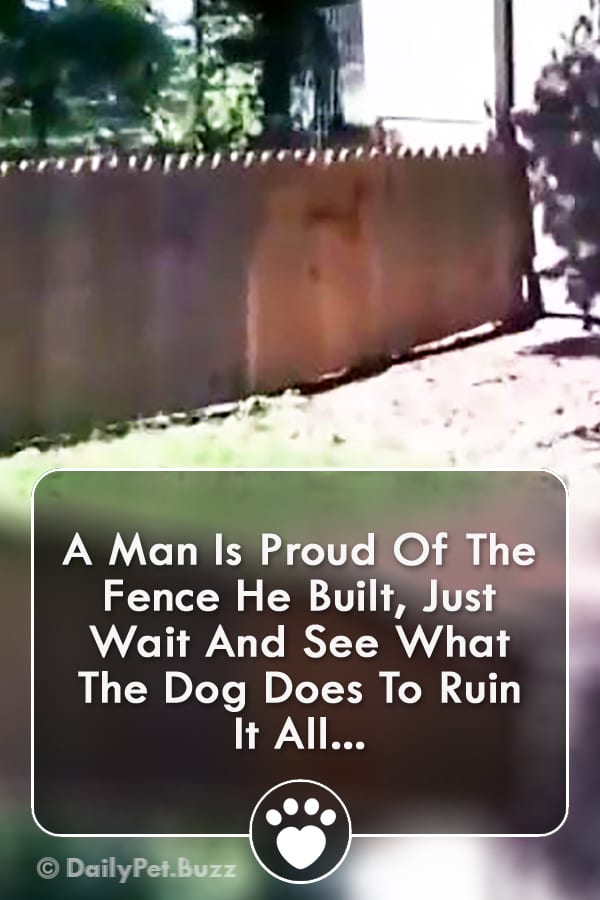