Reunions after a long time are such emotional affairs. There’s always the questions of why the other disappeared after a long time – what they are up to now. As tough as it is with people, it’s usually much easier with animals. Dogs often welcome their owners back with open paws, as we’ve seen in some video before. But a gorilla? That’s going to be a lot more tricky, given that they are a rung below humans on the evolutionary ladder. It can be done, though, as we see in this video.

We see Damian Aspinall, a wealthy philanthropist and conservationist, riding on a boat in Africa. He’s going to see a gorilla named Kwibi that he released into the wild five years before. It’s a very risky thing that he’s doing, since he’s going to be walking into the gorilla’s territory and he’ll be at his mercy if things go sideways. Still, he felt he had to go see Kwibi. After cupping his hands and making several calls, Kwibi shows himself. It’s time.

Aspinall is a bit nervous when he gets off the boat. After all, it’s been five years and who knows if Kwibi will even recognize him? It’s even more dangerous because gorillas are a LOT stronger than humans and could do a lot of damage to him before the people around him could do something to distract the gorilla. He adopts a deferential position in front of Kwibi.. and then it’s like no time has passed as Kwibi welcomes back his friend with open arms. What a great story.

There is some controversy surrounding Aspinall’s sanctuary for these gorillas ” it seems that they are not capable of defending themselves when they are released into the wild. He means well, but apparently, being around humans for too long takes away their abilities to cope in nature. If that’s the case, then Kwibi is very lucky to have survived those five years after leaving Aspinall’s.

I loved the whole video ” it was great to see the reunion between the two. How about you? We’d love to hear your thoughts in the comments section. Also, please ‘Like’ us on Pinterest! 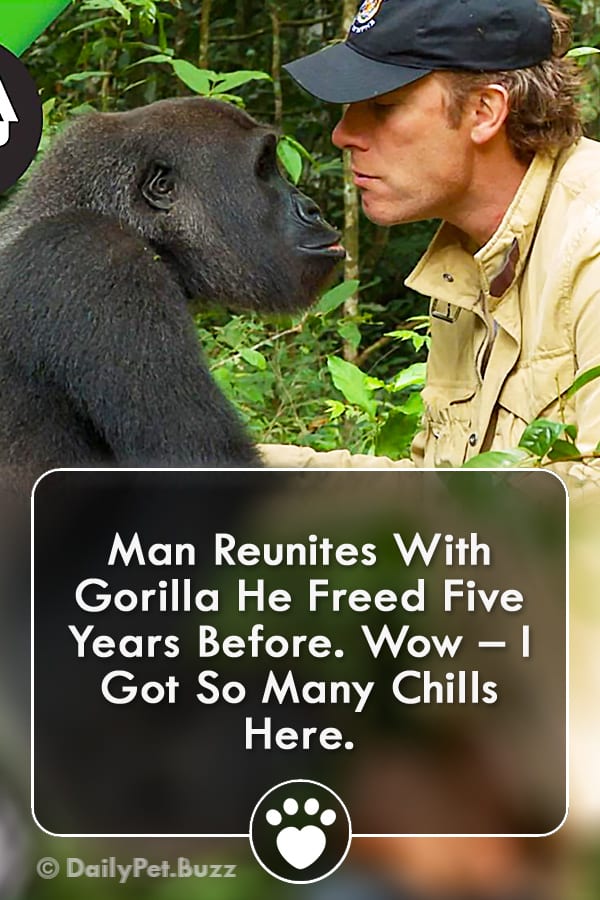