Dogs who serve in the line of duty are as important to safety as the officers themselves. Besides police dogs, there are also dogs who serve in the military alongside soldiers. They help find threats such as mines or enemies before they can do any harm. The work these dogs do is crucial for military missions. They help guarantee safety not only for the soldiers but for the civilians as well. At times, some of these dogs die tragically in the line of duty.

For example, there was the case of a dog who had served in Afghanistan several years. The dog had a condition that got worse as he became older. The dog retired from the military and went to live alongside his friend and owner. One day, the dog got noticeably ill. The soldier rushed him to the hospital where medical staff performed several tests. Unfortunately, there wasn’t much they could do and he passed away. When the military found out what had happened, they went to see the dog as he spent his last day in the hospital and gave his last breath. The military officers wrapped him up in an American flag. They said the dog deserved this honor, he had saved the lives of many fellow soldiers. Many servicemen attended the dog’s funeral to pay their final respects.

There also dogs who serve in other agencies such as drug enforcement. These dogs have the enormous responsibility of protecting our borders and shores. They go through an intensive training program. They learn how to detect bombs and drugs. Once they pass these tests, the dogs work a limited number of years. This is so the accuracy of their detection is guaranteed.

Once these dogs have served their country they are retired from service. One of the dog’s handlers is usually the one who adopts the dog. When they are working alongside police officers, they sometimes get hurt in the line of fire. A police dog is crucial for a police officer. It’s not only his dog but his partner as well. When something happens to the dog it also affects the police officer that works with him.

There was this case of a police dog who was injured in the line of duty. They are chasing a thief and the thief shoots the dog point-blank in the face. Most dogs would have died from the injuries, but this dog manages to return to his partner. The dog, Bruno is bleeding profusely and his partner thinks he will lose his best friend. Bruno is rushed to emergency surgery where the medical staff treats his wounds including a shattered jaw. They also manage to take out the bullet from his lungs.

When Bruno was recovering, he had a very special visit. It was from his partner and best friend. Look at Bruno’s reaction when he sees his best friend and the bond that obviously exists between them. When Bruno recovers, he is retired from the force. Bruno goes to live with his partner and friend. For those who say he’s just a dog I would say this: “He’s more than just a dog, he’s a police officer and a hero.” 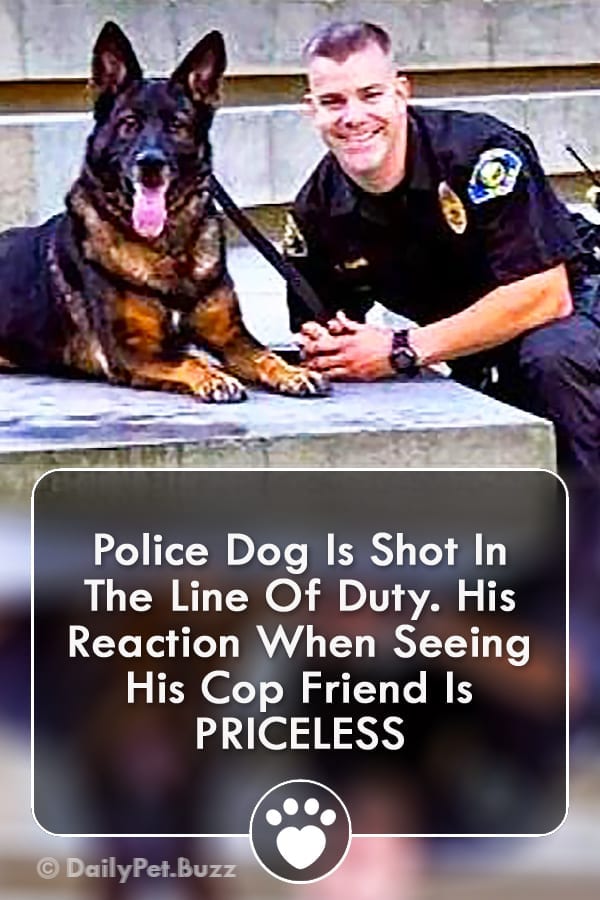