Dogs are such a close part of the family that it’s easy to forget they aren’t human. People love their pets so much they cant help but anthropomorphize them, imagining (rightly or wrongly) that they have certain human-like traits. And of course, just when a dog’s human parent is on the verge declaring their dog an honorary human, Fido’s inner canine will come out, whether that involves digging up a flower bed or shredding a couch cushion.

In the video posted below, you’ll see a baby bulldog who manages to be childlike and doglike at the same time. As you’ll see, there’s something about this that’s thoroughly endearing.

Bulldogs are one of the most charming breeds of dogs. In part, this may be due to their comical appearance: stubby legs, wide stance, droopy face, and hilarious underbite. The breed originated in England and has become something of a national icon. For as long as cartoonists have been using animals to represent countries, Britain has appeared as a bulldog, suggesting stubbornness and determination. The indefatigable Winston Churchill, who led Britain through some of its darkest hours, even looked like a bulldog! Bulldogs are courageous but not aggressive and their kindly disposition makes them excellent family pets. They tend to get along well with children and other animals.

At the time the video was made, Bentley was an adorable 8 week-old bulldog. He really loved being up on the couch, but his human dad had just cleaned it and told Bentley that he was banned for the time being. The little bulldog threw a hilarious little tantrum, just like a human toddler but with some wonderful canine flourishes — paw waving, barking, and some ridiculously cute whining noises. He’s really going all-out to get dad to change his mind! 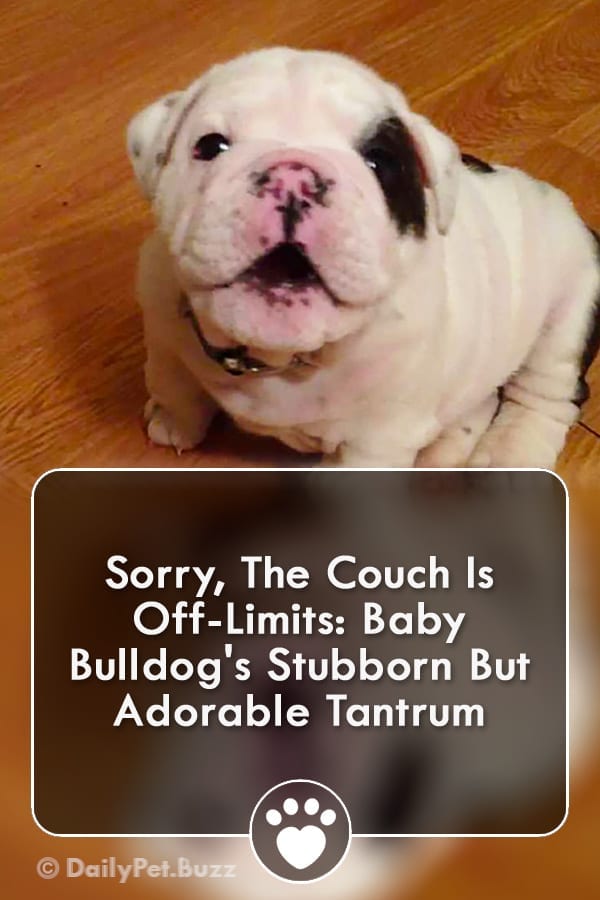