Dogs are territorial about certain areas of a house. They stake it as theirs. In this video, a dad has claimed that the sofa is off-limits to his French Bulldog. This does not go over well for the pooch, to state it mildly. He first turns on the charm, using those puppy dog eyes to full effect. Aww. Who could resist that? Dad can. OK, stage two. Cute whimpering. C’mon, puppy dog eyes AND whimpering? Full force Jedi Mind Trick. Nope.

Now here’s where he gets a little scary. The cute puppy turns to the Dark Side. He plants both front paws on the sofa like a lawyer about to give an impassioned summation. Then he glares at his daddy and starts making a loud, high-pitched sound that, if you listen carefully, sounds like, ‘GRANT ME THE SOFA, YOU FOOLISH MORTAL! DO IT BEFORE I REND YOU APART, PIECE BY PIECE!’ This cute puppy got scary for a second. It was like in the beginning scene ‘Fellowship Of The Ring’ , where Bilbo Baggins shows his dark side for a second when he tries to grab the ring.

Of course, this is a cute video and Dad laughs it off as the video ends. If he is a smart man, though, he sleeps with one eye open that night. The chances of him waking up the next morning and finding a chewed sofa pillow in his bed with him are pretty high. To paraphrase C-3PO in Star Wars: ‘Next time, let the French Bulldog puppy jump on the sofa.’

There are those who might think that the dad was being too harsh on the puppy. It’s a puppy! Let him on the sofa. He’s so cute! Give him to me! Oh, wait, that last one was me. Seriously, though – training a dog can be hard. The dad had every right to tell the Frenchie to stay off the sofa. It’s his house, his rules. Sometimes one has to make the dog sad to get them to learn what they need to do. If he gives in, then any future attempts will fail.

I’m one to talk. I can’t even keep my cats off the sofa. What do you think of the video? Was the guy too harsh or was he right? We’d love to hear from you! 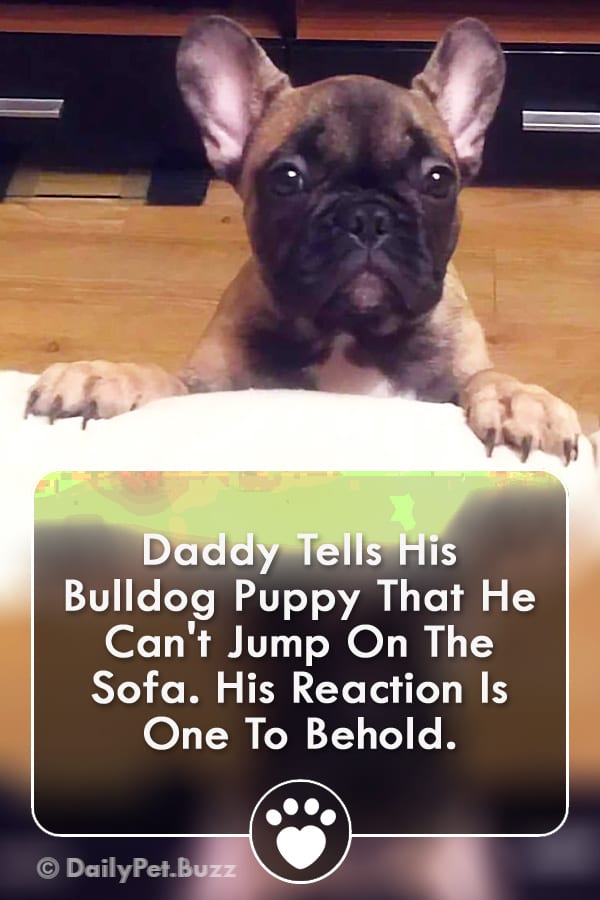