Pets do in fact suffer grief when they lose a friend. A case in point is a dog named George. His best friend was a black Labrador named Blackie. For 12 happy years, these two canine pals were inseparable. But then, sadly, Blackie passed away. Losing his life-long friend send George into a deep, dark depression. He had no appetite, became incredibly anxious, and obsessively chewed on his own skin. He spent whole days walking around in a fog of sadness, crying and whimpering. George’s grief was so profound that it seemed like he’d given up on life. And in fact, he nearly died on two occasions. For Jacquie Litton, George’s human mom, seeing her canine friend suffer like this was heartbreaking. No matter what she tried, nothing would cheer him up.

Nearly two years after Blackie passed away, Jacquie looked out the window to make sure everything was okay with George. As usual, he was lying on the porch but he wasn’t alone: there was a great big white duck sitting right next to him! George was a dog who’d never liked strangers but it was obvious that he and the duck, subsequently named Donald, had struck up a friendship. Donald the duck took to following George around everywhere and at nap time, you’ll find the two of them snuggled up next to each other!

Donald has the run of the house and for Jacquie that’s been trying at times — ducks just can’t be housebroken. But it’s definitely worth the trouble. George’s unusual new friend has had an amazing effect on his spirits. The once severely depressed dog quickly began to show signs of happiness.

The story of George and Donald is so extraordinary that it made national headlines. To see the two animal friends in action and meet their human mom, check out the report from CBS News that’s posted below.

How heartwarming was it to see a bereaved dog finally discover happiness again? Let us know in the comments at Facebook and don’t forget to like and share! 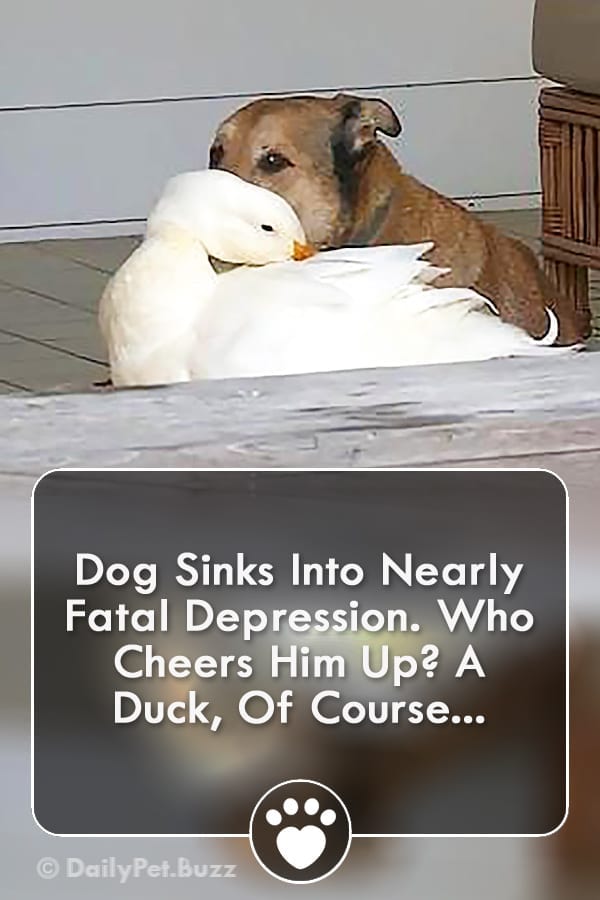