Mirror hijinks can get funny in a hurry. Just think of the famous mirror scene in the Marx Brother’s movie “Duck Soup.” Few animals have the kind of self-awareness needed for understanding that the creature they see in the mirror is their own reflection. Even fairly intelligent animals like dogs will freak out when they see the “other dog” in the mirror.

This is certainly the case when it comes to Kane, a handsome French Mastiff. He’s a member of a tried and true breed that goes back at least to Medieval times. These dogs are big and very muscular, so much so that they’ve been used for pulling carts and dragging heavy objects! But where the French Mastiff really excels is as a guard dog, whether for tending sheep or protecting humans from intruders. Aggressively fearsome though he looks, Kane is really a gentle giant at heart. It’s just that if there’s an intruder, human or animal, he instantly goes into no-nonsense guard dog mode.

And so when Kane saw himself in a mirror, he instantly began to confront the “intruder.” His aggressive stance and determined expression alone would be enough to make any actual intruder think seriously about getting out of there fast. But the “other” French Mastiff that Kane is confronting has the temerity to stand there staring right back at him! Kane unleashes a terrifying low, rumbling growl, but this also has no effect on the bold interloper. He bares some teeth and does the chop-licking behavior that dogs do when they’re ready to strike. He throws in a bark for good measure. Still, the unbelievably brazen mastiff he’s “confronting” isn’t budging!

We’ve posted the video of this fearsome yet thoroughly adorable French Mastiff below. If only he knew he’d met the enemy and he was himself. 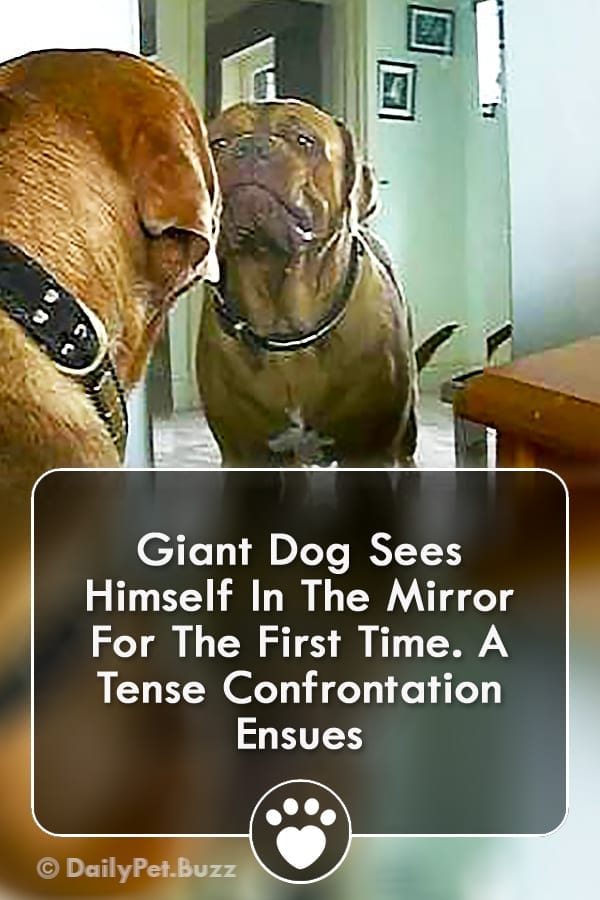