Chances are you’ve known of a dog that had an irrational fear of something (or many things). If you thought that was a uniquely eccentric dog, think again: seemingly absurd fears are actually pretty common among dogs. Some don’t like noisy things like thunder, fireworks, and the dreaded vacuum cleaner. There are dogs that are frightened of stairs. Maybe they can climb them okay, but when it’s time to head back down, they need a lot of moral support. There was another dog with an aversion to carpet; if he somehow ended up standing on it, he’d freak out and walk backward to get off the horrifying plush floor covering. Perhaps the most bizarre example of an irrational canine phobia involved actress Julia Roberts. Whenever the dog saw a photo of her in a magazine, he’d flee in terror.

Hiro, a ridiculously handsome Siberian Husky, doesn’t have any problem with Hollywood celebrities but there’s a green hair clip that leaves him trembling with fear. When one of his humans holds up the green clip, his eyes widen with the horror of recognition. Then when it’s opened and closed a few times, he loses it. The expression on his face is priceless. He barks and backs away from the terrifying object. We aren’t sure exactly why this big dog is so frightened of a hair clip. Maybe it’s the jaw-like appearance of its teeth or perhaps the snapping sound has some bad association deep within his psyche.

What makes it easier to laugh at Hiro’s terrified reaction to the hair clip is that it looks like it’s really just a game he plays with his human. He’s wagging his tail, not tucking it between his legs. This is telltale body language. He also had an escape route available but instead of running away as fast as possible, he chose to stick around.

How did you like this silly Husky’s reaction to the hair clip? Any good stories of crazy canine phobias? Let’s hear ’em in the Facebook comments. Like and share: it’s a great way to give your friends a laugh. 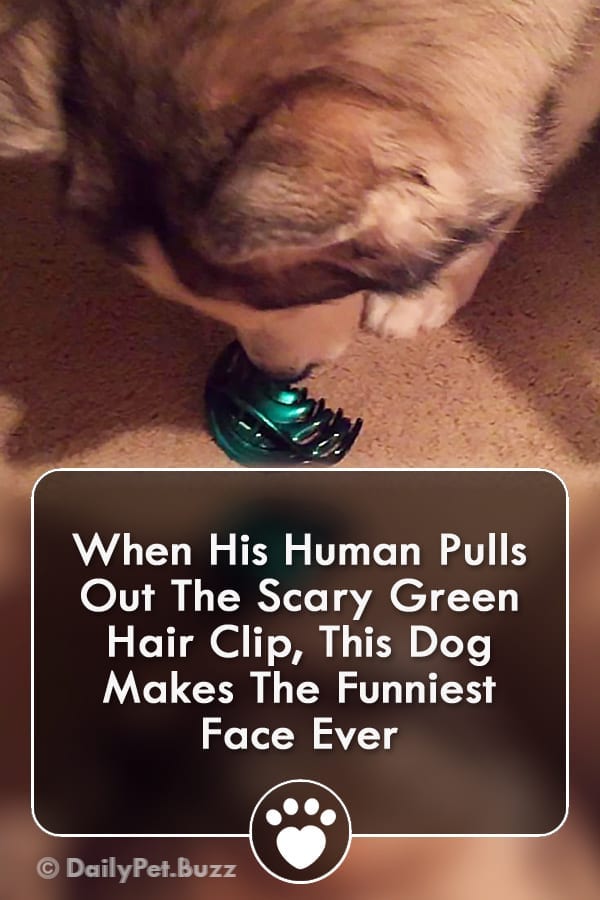