Having a large dog presents a problem ” they need exercise, and finding the time to do it can be very difficult. This is why I don’t have a large dog – the largest one I had was a miniature schnauzer. She could run around the apartment if she wanted exercise and there were times she would run on a beach. The person in the video has a large dog, and I love the solution that they came up with to prevent any extra work for either of them.

The video shows Luther, a Great Dane, jogging alongside his daddy, who is riding a bike. This looks like a great routine for the two of them. Luther’s a big dog and he needs a lot of space to roam around. This bike ride/ run will help burn whatever excess energy he has ” and it keeps him from being cooped up anywhere. The question is – what will they do if Luther’s energy runs out during their time on the path?

At some point, Luther gets tired. Instead of making his daddy slow down so that he can walk the rest of the way, he merely hops into the wagon that’s trailing the bike. Now he can rest in comfort as his daddy continues to pedal along the path. I just wonder how much extra effort his weight makes his daddy expend – especially if they hit a particularly steep uphill part of the path.

It’s great that his daddy came up with this solution. Luther can rest and his daddy can keep up the exercise routine that he has in mind without having to sacrifice speed. Luther’s a big dog, but even large dogs can tire out. It’s not like he’s a horse, though he is pretty darn close. Also, the two of them get to spend some quality time together. I’d have to say that’s pretty close to being a win-win right there.

Wasn’t Luther so adorable? Have you done anything like this with your dog? We’d love to hear your stories. Tell us all about it in the comments section! Also, please ‘Like’ us on Pinterest. 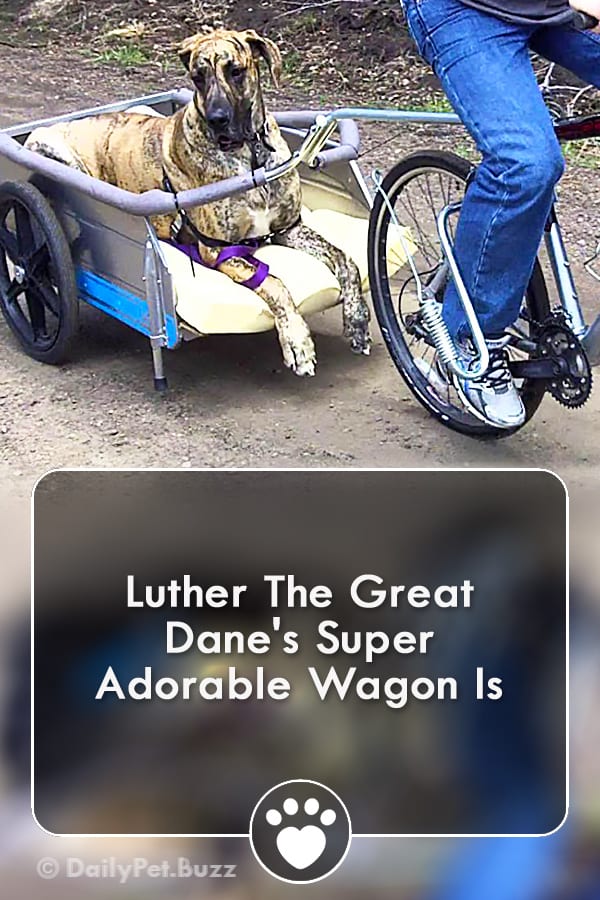