When Steve Booker was taking an early morning stroll along the beach in Cozumel, Mexico, his gaze was drawn to something unusual under a nearby bridge. A massive sea turtle was lying on her back, beached and bloody. Things weren’t looking too good for the stricken animal. Steve presumed the worst. However, upon closer observation, he saw the sea creature blink. Jumping into action, the Oklahoma native did something that has thousands singing his praises online.

Steve surmised the sea turtle had been on her way to the ocean before falling from the road overhead and landing on her sheck. There was no telling how long she was there for, but it’s safe to say she was lucky Steve came along when he did. In a flash, he set to work, gently rolling the creature over. That’s when he saw just how badly injured she really was. Her sheck was badly cracked from the fall.

At this point, Steve felt an innate responsibility to make sure she made it back home safely. With his camera, he followed the mighty turtle as she crawled her way towards the sea, slowly but surely. Along the way, you can hear Steve’s words of encouragement towards the creature, coaxing her closer to the lapping shoreline. You can see the struggle she endures; breathing heavy as she drags her heavy, damaged sheck across the rocky sand. What’s more, it’s clear that Steve felt her hardship too as he commentates the journey with genuine empathy.

At last, their efforts prove worthy as the exhausted sea turtle reaches the water, letting the waves pull her back home to safety. She floats out of sight, leaving Steve at the shore relieved, looking out upon the ocean to the beautiful sunrise.

Upon returning home, Steve shared the video online with the world and expressed how he was just glad to have been able to help the poor creature. He mentioned that ‘Mother Nature is pretty resilient’ and hoped that the turtle would heal in time.

The chance to get up close to a sea turtle in the wild doesn’t come along often but for this fallen animal, it’s lucky that someone with compassion and care was walking by. The connection between man and creature here is one Steve will always remember and many viewers are applauding his good deed in saving the turtle. Watch this hero in action right here. 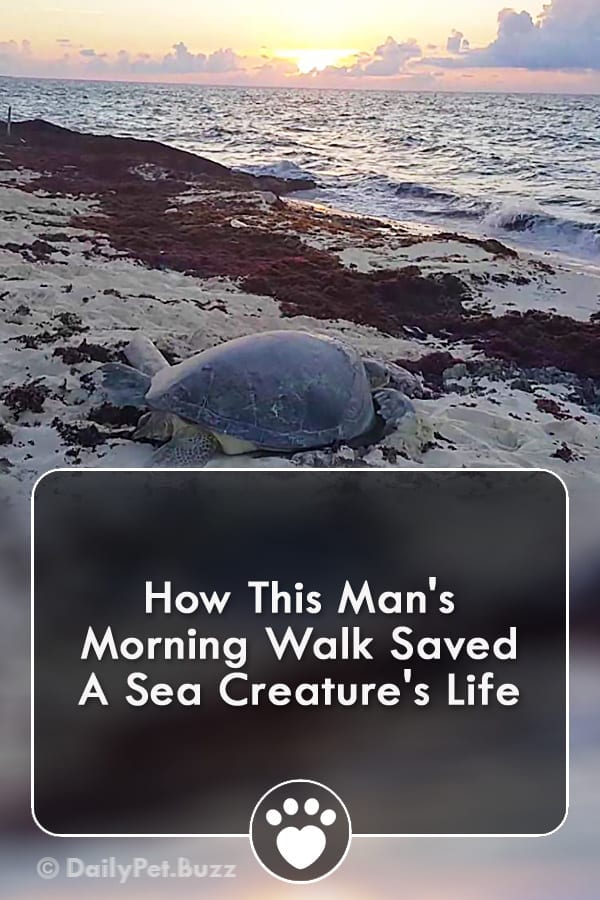