American sports fans are familiar with old rivalries like Harvard-Yale, Michigan-Ohio, and Yankees-Red Sox. The soccer world has its rivalries, too. One of the most intense is between the Spanish teams Real Madrid and FC Barcelona. Any game they play is known simply as “el Clasico.” These are the largest cities in Spain and the match’s intensity is intensified by a regional and political backstory. Fans in other countries have caught the fever and “el Clasico” has become one of the biggest games on the soccer calendar. In recent times, the rivalry has been personified by each team’s star player, Cristiano Ronaldo of Real Madrid and FC Barcelona’s Lionel Messi. Ironically, neither player is Spanish.

Lionel Messi hails from central Argentina. He moved to Barcelona at the tender age of 13, his talent already so obvious that the team not only sent him to their training camp but covered medical treatment he needed. Messi went on to a brilliant career playing for FC Barcelona as a pro and for the Argentine national team in international events like the World Cup. He’s one of the very best soccer players of all time.

Cristiano Ronaldo was born and raised on the Portuguese island of Madeira. By the age of 18, he was already signed with British soccer powerhouse Manchester United. Six years later, in 2009, Ronaldo joined Real Madrid. Some figures will give an idea of his star power. Madrid had to pay a “transfer fee” of over $100 million. His initial contract with Madrid provided a salary well over $10 million and a billion dollar buyout clause.

As you’ll see in the video we’ve posted below, Ronaldo is definitely not happy when Messi scores the game-winning goal in “stoppage time.” Perhaps it’s especially galling for Ronaldo because this is Messi’s second goal of the game and the 500th of his career!

Are you a big soccer fan or do you just love any sports rivalry? Maybe you just like seeing a professional athlete lose it? We’d love to hear from you in the Facebook comments. Be sure to like and share! 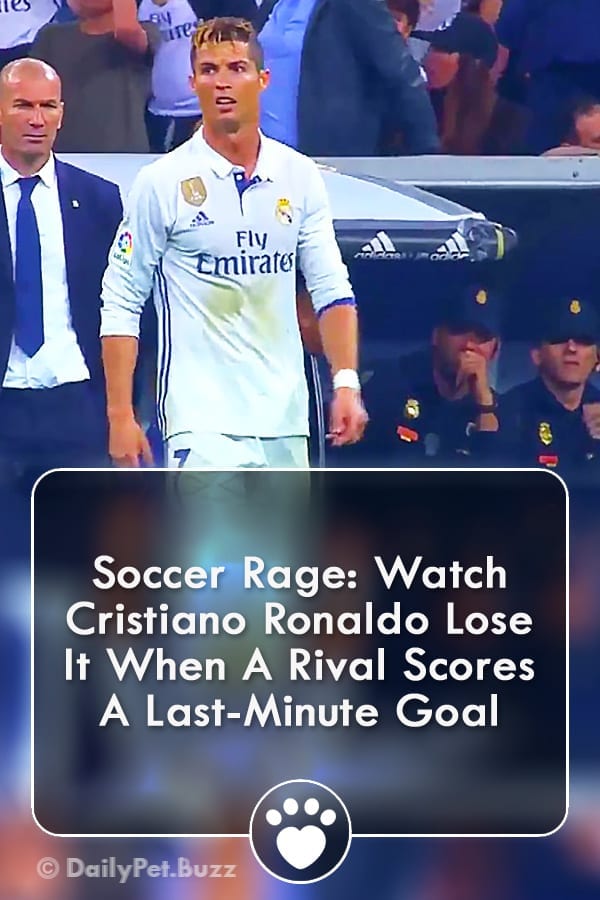