There was a Greek myth about a man named Sisyphus. He discovered fire and the gods were angered, punishing him by making him be tied up and – oh, wait. That’s Prometheus. Never mind. Sisyphus was a king who thought himself smarter than Zeus, the patriarch of the gods. Not wise. He was condemned to push a giant boulder up a hill only to have it roll back down to the bottom, making him do it all over again. I thought a bit of that when I saw this video of a puppy and a giant newspaper.

Now, I’m not saying the puppy that we see here is being punished. No – she’s just trying to help out her daddy by getting the paper. The only problem is, it’s the Sunday edition. The really big one. This one is bigger than the puppy herself, though she’s determined to carry it from the end of the driveway all the way back to the house. At first it seems like she’s going to give up, but her daddy gives her some encouragement and she turns around and seizes it with even more gusto.

This task will probably get a lot easier for her when she gets larger. Then picking up the Sunday paper will be a breeze. For now, though, she has to rely on leverage and balance, because she’ not strong enough to drag that thing all the way back. The driveway is not that long, but with the added weight, it probably feels like two miles for this little puppy. The video ends with her having gone about 15 or so feet and there’s still a turn to get to the house.

I just hope those puppy teeth didn’t render the first several pages of the paper unreadable. It seemed like she grabbed it tightly, with the possibility of her sinking her teeth in it. Then again, she might have the instinct to be able to carry it without chewing on it. If that’s the case though, her daddy could always go online and look at the headlines and other items and just let her get the paper Monday through Saturday from now on –

Wasn’t this puppy the most adorable thing you’ve ever seen, though? Tell us your thoughts in the comments section! Also, please ‘like’ us on Pinterest. 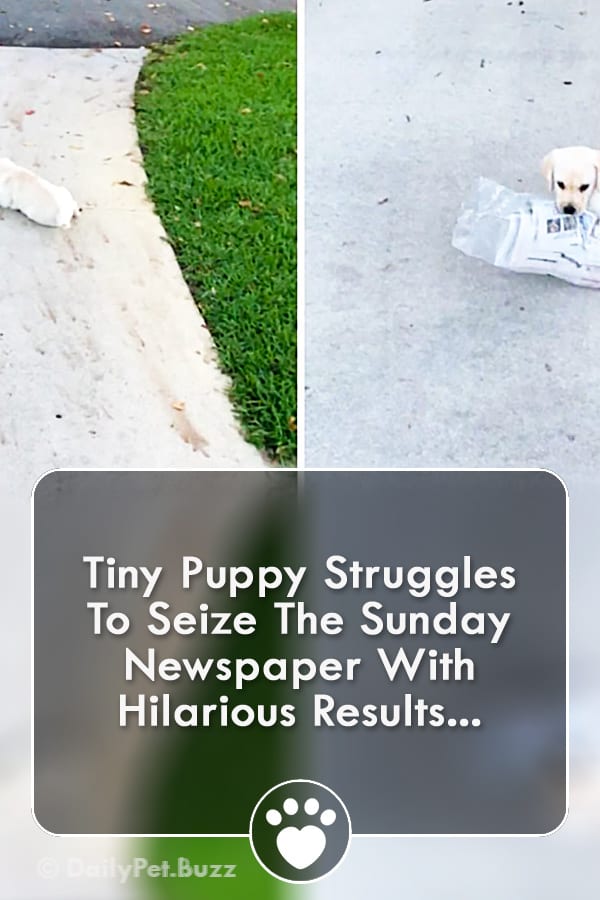