Being a musician out in public – be it street or subway ” is a hard gig. One might think that getting to sit outside and playing all day while the public throws you money hand over fist is a sweet job. It’s hard and it’s lonely. You have to play all day, even with your hands or feet hurting. Even it it’s cold and rainy, you need to find a spot under cover and play. Unless you have a second career, a lost day of playing is a lost day of pay. This video shows one perk, though.

There’s a street musician strumming his guitar in Malyasia. It looks like it’s later in the evening, so he’s probably been at this for at least 12 hours, if no longer. His hands are probably hurting and he’s also probably thinking about the next day. People have likely been ignoring him, the downside of a career like this. As a street musician, you live off the whims of other people -sometimes they may be in the mood to listen, other times, not. The humans aren’t listening, but a decidedly non-human group is, today.

Four stray kittens make their way over to the street musician and plop their butts down, watching and listening eagerly as he strums his song. He realizes that he has this audience and it surely makes him smile, despite their lack of any currency. They are giving him their rapt attention, though, and he probably feels like he couldn’t abandon his audience, no matter how many legs that they walk on.

Finally, the song ends. Hopefully, the musician felt a little less tired once he made his way home. The fond memory of what happened probably helped him go to sleep faster that night. Well, unless he had a dream that all of a sudden, he was playing in a world full of cats and none of them had any money. Then that would be more of a nightmare, than anything. I’m sure that he had pleasant dreams, though.

What did you think? Did you enjoy the little ‘concert’ that he gave? Those kittens were ADORABLE, weren’t they? I wanted to scoop them up for myself. We’d love to hear your thoughts in the comments section. Also, please ‘Like’ us on Pinterest. 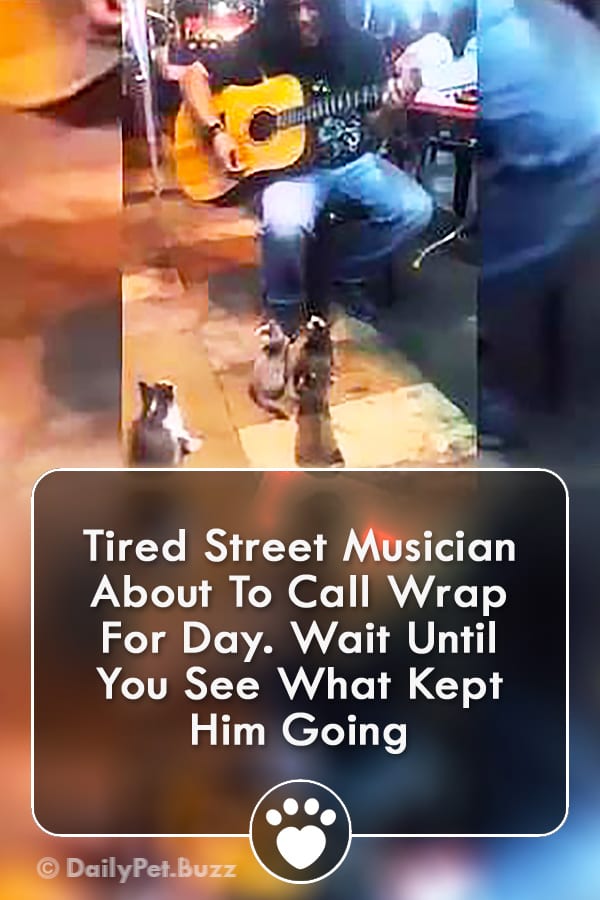