You know how it goes. You’re sitting there one minute feeling just fine – and then the next minute the only thing in the world you want to do is lay your head down and doze for at least an hour – or 10. I call them the ‘bonkies’ , since it feels like you just bonked into a wall. This is all part of one’s circadian rhythm and no amount of caffeine can ward it off. It looks like it affects both humans and canines alike, if this video is anything to go by.

There are four occupants on a single sofa. They are watching a TV show and it looks like the bonkies have hit two of them – with a third having already succumbed to them. The two of them still fighting – and losing – are a toddler boy named Ryder and his bulldog, Roco. The one who already gave up and has laid down and fallen is asleep is another dog, named Stella. The only one of the four who is awake is an older girl named Riley.

I’m amazed at how fast kids and dogs can fall asleep. It’s like they yawn once and then their lights are out for a while. Ryder is so cute, he’s pitching forward and then correcting himself and then – pitch forward. Eventually he’s going to plop down face first on that sofa. Rosco is drifting off while sitting down. This scenario was so cute that their mommy was right to capture it all on film for our amusement.

I know exactly how this kid feels. There are many times that I find myself drifting off while sitting on the sofa. At first I find my head drifting forward just like this kid does. After several times of jerking awake, I finally give up and put a pillow behind my head against the wall and just doze for a bit. It’s a good thing that I work at home, isn’t it? For some reason, I don’t see this sort of thing flying in an office cubicle environment.

What did you think? Wasn’t this such a cute scene? Has something similar happened with your children and your dog? Let us know in the comments! Also, please ‘Like’ us on Pinterest. 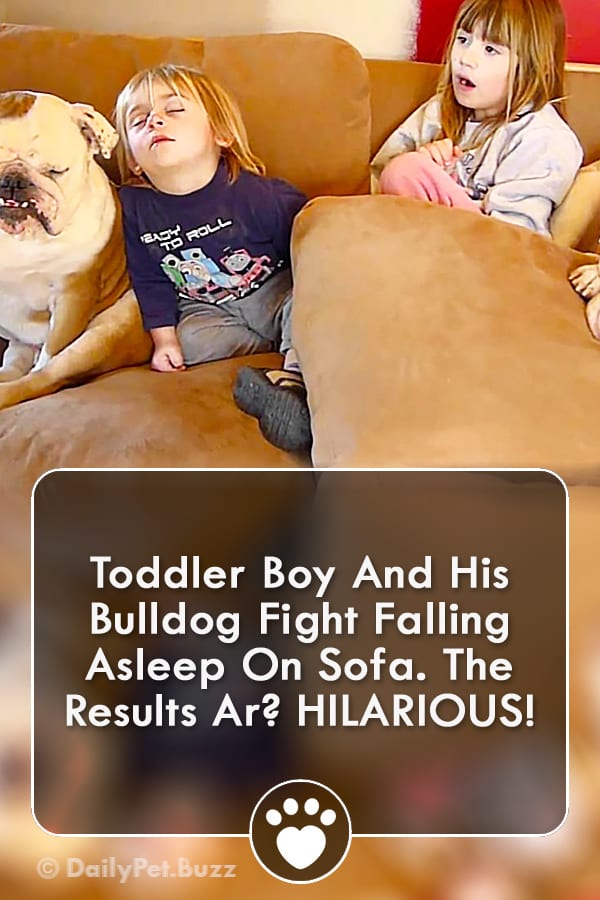