The old expression “fighting like cats and dogs” may be a cliche, but that doesn’t mean it isn’t true. Cats and dogs really do seem to be enemies by default. From our perspective, it seems silly: we give them plenty of love (and food), the house has plenty of space; surely they can leave peacefully together.

Perhaps the secret is starting when they’re young. That certainly seems to be the case for the adorable animals in the video posted below. A fuzzy little fur ball of a puppy and three outrageously cute tabby kittens appear to have struck up a fast friendship. They even enjoy snuggling up together at nap time.

The kittens were all lying on their backs looking ridiculously happy and comfortable while snoozing away. They look like they could spend the rest of the day sound asleep — and being cats, they probably did! This presented a bit of a problem for the puppy. She was wide awake and clearly ready to get up and do other things, whether grabbing a bite to eat, saying hello to the humans, playing with a ball, gnawing a chew toy, or just chasing her tail. But for now she was stuck. This considerate puppy didn’t want to disturb her kitten friends! One of the kittens woke up and stretched a little but then went right back to sleep. Shortly thereafter, something startled the other two kittens awake, but they, too, promptly nodded right off.

The human parent who was filming this cute little scene was sympathetic to the puppy’s plight and gave her a few encouraging pats on the head. Still, the puppy wasn’t moving. Some time passes and while the kittens have moved around, they’re still fast asleep. One of them discovered the puppy’s neck makes for an excellent pillow!

Was this puppy being too considerate or should kittens that cute never be disturbed? Let us know what you think in the Facebook comments and don’t forget to like and share! 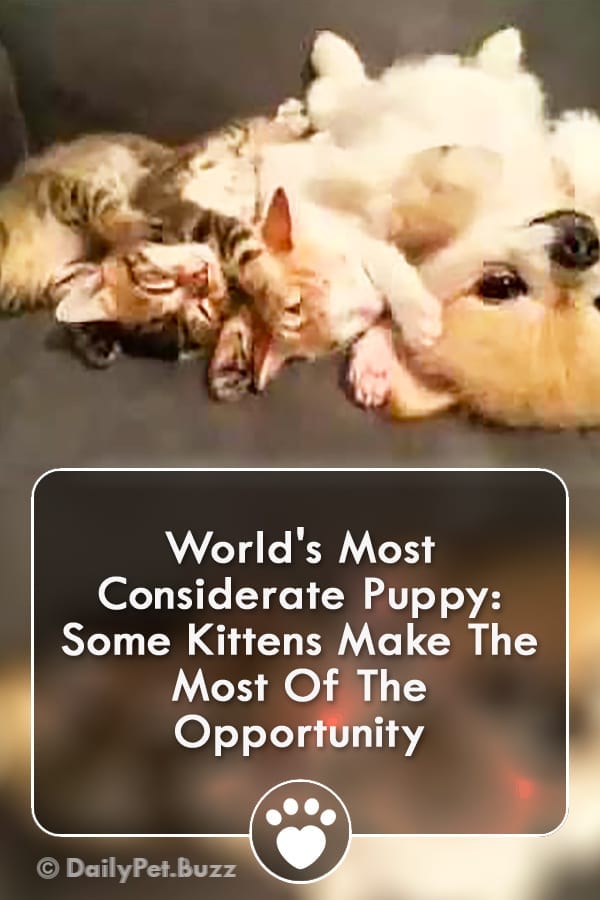